The Heir of Redclyffe 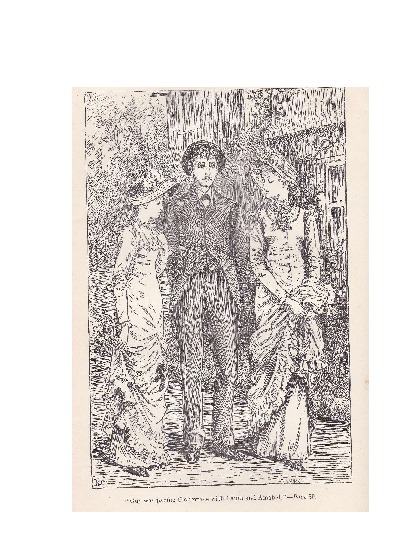 "Guy was pacing the terrace with Laura and Amabel." Illustration of The Heir of Redclyffe by Kate Greenaway. London: Macmillan and Co., 1890, page 89. Image courtesy Clare Walker Gore.

The Heir of Redclyffe (1853) was Charlotte M. Yonge’s first bestseller, establishing her reputation as an enjoyable as well as an improving novelist; as one critic wrote nearly twenty years later, “Anything written by the author of ‘The Heir of Redclyffe’ is sure not only to find a good number of readers, but to provide them with good pabulum.”[1] Its hero, Guy Morville, is not only a morally serious and deeply Christian young man, but also the heir to a gothic castle, a fierce temper, and an ancient feud with the other branch of the Morville family, represented by his irritatingly priggish cousin Philip. The two are brought together when Guy comes to stay with his Edmonstone cousins (with whom Philip also lives), and although Guy makes every effort at conciliation, Philip’s unacknowledged jealousy causes a rift between them. Despite Philip’s efforts to thwart their romance, Guy marries the younger Edmonstone sister, Amy – his dealings with her family highlighting Philip’s unworthy action in becoming secretly engaged to the older Edmonstone sister, Laura – but on their honeymoon in Europe, sacrifices his life by nursing Philip through a near-fatal fever. The family feud is finally settled upon Guy’s death, as Philip retrospectively recognises his true worth, and the Christian allegory of Guy’s life and death is brought out in the novel’s famously tear-jerking conclusion.

Although this summary of the novel’s main action suggests that disability does not play much part in the narrative, in fact, Amy and Laura’s disabled brother, Charles, is very much at the forefront of the novel. Although he is confined to his couch as a result of his tubercular hip, he offers an amusing and insightful commentary on all the action of the novel, acting as Guy and Amy’s confidant, seeing through Philip’s pretensions to moral superiority, and modelling for the reader, through his own reaction to Guy, what we might have to gain from reading the novel. Yonge was to become famous for her saintly invalids – typified by Margaret May in The Daisy Chain – but Charles is anything but a saintly character. In contrast to Guy, he is frequently selfish, spiteful, sarcastic and impatient, but he is also capable of great loyalty, kindness and stoicism. As a sympathetic and believable character, Charles is perhaps the Edmonstone with whom the reader is most likely to identify, and Yonge offers a sensitive and realistic portrayal of his struggle to come to terms with physical impairment. Although, as in the passage below, Charles is shown to resent his physical suffering and immobility, he is shown to be a valuable member of the Edmonstone family, better able to advise his mother and sister than his impetuous and easily-led father, and he is finally shown as Amy’s closest companion in her widowhood, promising to help her bring up her daughter. Moreover, his own relationship with Guy is dealt upon at such length that it comes to seem almost as important as the marriage plot from which he is excluded.

“ ‘You don’t know what a bore it is to lose the one bit of quicksilver in the house!’ said he, yawning. ‘I shall only drag out my existence here till you come back.’

‘You, Charles, the maker of fun!’ said Guy, amazed.

‘It is a case of flint and steel,’ said Charles; ‘but be it owing to who it will, we have been alive since you came here. You have taken care to be remembered . We have been studying you, or laughing at you, or wondering what absurdity was to come next.’

‘I am very sorry—that is, if you are serious. I hoped at least I appeared like other people.’

‘I’ll tell you what you appear like. Just what I would be if I was a free man.’

‘Nay, wait a bit. I would never be so foolish. I would not let the best hunter in the country go when I had wherewithal to pay for him.’

‘You would not have such an ill-conditioned self to keep in rule.’

‘After all,’ continued Charles, yawning, ‘it is no great compliment to say I am sorry you are going. If you were an Ethiopian serenader, you would be a loss to me. It is something to see anything beyond this old drawing-room, and the same faces doing the same things every day. Laura poking over her drawing, and meditating upon the last entry in Philip's memorandum-book, and Amy at her flowers or some nonsense or other, and Charlotte and the elders all the same, and a lot of stupid people dropping in and a lot of stupid books to read, all just alike. I can tell what they are like without looking in!’ Charles yawned again, sighed, and moved wearily. ‘Now, there came some life and freshness with you. You talk of Redclyffe, and your brute creation there, not like a book, and still less like a commonplace man; you are innocent and unsophisticated, and take new points of view; you are something to interest oneself about; your coming in is something to look forward to; you make the singing not such mere milk-and-water, your reading the Praelectiones is an additional landmark to time; besides the mutton of to-day succeeding the beef of yesterday. Heigh-ho! I'll tell you what, Guy. Though I may carry it off with a high hand, ‘tis no joke to be a helpless log all the best years of a man's life,—nay, for my whole life,—for at the very best of the contingencies the doctors are always flattering me with, I should make but a wretched crippling affair of it. And if that is the best hope they give me, you may guess it is likely to be a pretty deal worse. Hope? I've been hoping these ten years, and much good has it done me. I say, Guy,’ he proceeded, in a tone of extreme bitterness, though with a sort of smile, ‘the only wonder is that I don't hate the very sight of you! There are times when I feel as if I could bite some men,—that Tomfool Maurice de Courcy, for instance, when I hear him rattling on, and think—’

‘I know I have often talked thoughtlessly, I have feared afterwards I might have given you pain.’

‘No, no, you never have; you have carried me along with you. I like nothing better than to hear of your ridings, and shootings, and boatings. It is a sort of life.’

Charles had never till now alluded seriously to his infirmity before Guy, and the changing countenance of his auditor showed him to be much affected, as he stood leaning over the end of the sofa, with his speaking eyes earnestly fixed on Charles, who went on: ‘And now you are going to Oxford. You will take your place among the men of your day. You will hear and be heard of. You will be somebody. And I! – I know I have what they call talent – I could be something. They think me an idle dog; but what’s the good of doing anything? I only know if I was not – not condemned to – to this – this life,’ (had it not been for a sort of involuntary respect to the gentle compassion of the softened hazel eyes regarding him so kindly, he would have used the violent expletive that trembled on his lip;) ‘if I was not chained down here, Master Philip should not stand alone as the paragon of the family. I’ve as much mother wit as he.’

‘That you have,’ said Guy. ‘How fast you see the sense of a passage. You could excel very much if you only tried.’

‘I don’t know that one ought to let talents rust,’ said Guy, thoughtfully; ‘I suppose it is one’s duty not, and surely it is a pity to give up those readings.’”