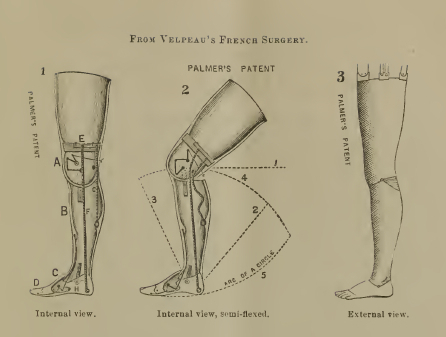 Illustration of the mechanism inside a Palmer Patent Leg. From The Palmer Arm and Leg, Adopted for the U.S. Army and Navy by the Surgeon-General, U.S.A. (Philadelphia: American Artificial Limb Company, 1865), 27. Image courtesy of the National Library of Medicine, Bethesda, MD.

In 1846, B.F. Palmer filed the first patent for an artificial leg in the United States. His product, characterized by its smoothly articulated knee, ankle, and toe joints, as well as its elegant and lifelike appearance, was an immediate success. It won awards at dozens of industrial fairs and competitions in the United States, but Palmer was most proud of his invention’s performance at the Great Exhibition in London in 1851. Not only did the Palmer Patent Leg win a silver medal, it was also celebrated in the London Times and lampooned in Punch, a popular satirical magazine.[1] By 1857, Palmer had sold nearly three thousand of his famed appliances, and almost five hundred of them belonged to women.

The Civil War (1861-65) resulted in thousands of amputations and dramatically changed the retail landscape for prostheses. The number of patents issued for artificial legs in the United States more than quadrupled from 21 between 1846 and 1860 to 88 between 1861 and 1873.[2] In 1862, the United States government agreed to supply artificial limbs to injured soldiers, and manufacturers fought vehemently for both government contracts and the patronage of wounded clients. Palmer’s advertising included this brochure, The Palmer Arm and Leg, Adopted for the U.S. Army and Navy by the Surgeon-General, U.S.A., which featured testimonials from surgeons and artificial limb wearers, both military and civilian. The three letters excerpted here articulate three different experiences of disability in nineteenth-century America, but their perspectives remain limited, as they were curated and likely edited by a manufacturer who aggressively controlled his product’s reputation. Still, the testimonials illustrate how the artificial limb intersected with popular ideals of military masculinity, as well as men’s physical command over railroads and other symbols of industrial growth and achievement, even as these technologies were responsible for much civilian limb loss. Both men and women put a premium on physical activity and ease of movement, and many of these advertising letters, including the third excerpted here, also appealed to the conventions of sentimentalism. In the end, Palmer’s greatest achievement was his ability to present the artificial limb as a desirable consumer product, bearing the diverse values and priorities of his time and place.

[2] Laurann Figg and Jane Farrell-Beck, “Amputation in the Civil War: Physical and Social Dimensions,” Journal of the History of Medicine and Allied Sciences 48 (1993): 461.

[This gallant General has risen from the rank of Captain while using the Palmer Leg in the service. Amputation above the knee.]

Dear Sir: I have now used the Palmer Leg (full length) for more than two years. During most of that time I have been on active duty in the field. It has stood the severe test of campaigning, exposure to all weathers, and constant use in the saddle, admirably; not better than I had hoped, but far better than I expected. I have never been kept off duty an hour by any fault in its mechanism. I willingly bear testimony to its merits, and express my satisfaction with the result of the test to which I have subjected it. (It is not bullet-proof—few legs are!)

I am, sir, very respectfully,

Dear Sir: On the 22d of April, 1857, it was my misfortune to lose a foot and ankle-joint by a railroad accident. Since wearing your Artificial Leg, I have, the greater portion of the time, been employed on the Pennsylvania Central Railroad in the capacity of conductor, and in the position have run, at different times, the most difficult trains on the road (accommodation trains[1]), from the fact of these requiring greater activity on the part of the conductor, such as jumping on and off at stations, passing quickly through the train from one car to another, &c. It affords me great pleasure to add my testimony to the superiority of your limb. In fact I can scarcely realize that I have suffered so severe a loss as that of a foot. During the six years I have worn the leg I have thoroughly tested it in the most trying position in which a leg, particularly an artificial leg, can be used, and am happy to say I have never found it wanting. Should you wish to refer any parties to me for information concerning the good qualities of my limb, I would be happy to see them at my residence, No. 1344 Coates Street.

I remain yours, truly,

The Opinion of a Lady

Dear Doctor: Having derived so much benefit from your skill in the adaptation of an artificial foot, I cannot refrain from expressing my gratitude—daily increasing as it is—for I more and more experience the ease and facility movement through your invaluable invention.

The 17th of last March my foot was amputated. The period of deep distress, and the frightful future of helplessness then opening before me in my 22d year, can only be realized by those of similar sad experiences. Unfortunately, not a few, in this day of crippled humanity from war’s sad footprints, will understand me.

When Dr. Olcott,[4] of Brooklyn, after close investigation of the subject, made me acquainted with your wonderful invention, I confess I had but little faith in the possibility of so far repairing my loss; but, from your care, I found myself not only able to throw aside my crutches, but was surprised immediately to find myself an independent walker. The second day of the trial I walked, without crutch or cane, full two miles; and now, after five months’ use, part of that time travelling, I find that I can run up and down stairs, walk without limping, and, with a perfect feeling of security, make my way through the crowds of a metropolis; indeed my most intimate friends would scarcely suspect the presence of an artificial foot.

It would be an easy matter to conceal my loss, were I so disposed; but my sympathy with the unfortunate, and my gratitude to you, my dear Doctor, forbids anything of the kind; and I ask you to permit me to offer my public testimony to your skill, and will ever hold myself ready to gladly respond to any inquiries from those who may be interested.

I remain yours, gratefully,

[1] Local trains that make frequent stops, often carrying both passengers and freight.
[2] The Pennsylvania Railroad, founded in 1846.
[3] An amputation technique pioneered by James Syme (1799-1870), which removed the foot by disarticulating the ankle, removing the malleoli, and using a heel flap to cover the ends of the tibia and fibula.
[4] Cornelius Olcott, who graduated from the Medical Department of the University of the City of New York in 1849 and practiced at 104 Bedford Avenue, Brooklyn.