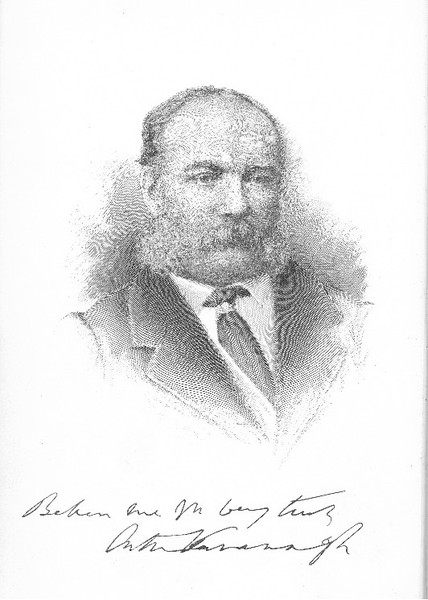 Portrait of Arthur Macmurrough Kavanagh, the disabled MP upon whom Richard Calmady was based. Image courtesy Wikipedia under a Creative Commons License.

The History of Sir Richard Calmady was something of a succès de scandale when it was published in 1901. The author, Lucas Malet, had already made her name with her bestselling novel, The Wages of Sin (1890), which dealt with the sexual double standard for men and women, but The History of Sir Richard Calmady was seen as even more shocking because of its disabled protagonist and the frank depiction of his quest for romantic and sexual fulfilment.

The fact that Lucas Malet was the pen-name of Mary St. Leger Kingsley Harrison added an extra spice of scandal to the novel’s publication. Her father, Charles Kingsley – a giant of Victorian letters, novelist, critic, Churchman and campaigner – was strongly associated with the Muscular Christian movement, while The History of Sir Richard Calmady clearly displays the writer’s interest in Roman Catholicism (hated by Kingsley), which led to her conversion in 1901. Moreover, Kingsley’s Muscular Christian values were antithetical not only to the aestheticist style of the novel, but also to its sympathetic treatment of its subject matter, which includes atheism, sexual inversion,[1] and of course disability.

Malet appears particularly fascinated by the causes of disability, depicting Richard’s physical impairments as a form of paternal inheritance. At the beginning of the novel, Richard Calmady’s father is horribly injured in a horse-riding accident, and his legs have to be amputated at the knee. When his son is born posthumously without lower legs, with his feet where his knees would usually be, the implication is that the father’s injury is written onto the son’s body. In addition to this explanation, which draws on the theory of maternal impressions still influential at the time the novel is set in the 1840s,[2] Malet introduces the idea of a family curse, allowing the reader (but not the main characters) to learn of a legend by which the wicked action of Sir Denzil Calmady in the seventeenth century – in impregnating and abandoning a local peasant girl and then running over their child in his carriage, cutting off his legs and killing him – caused the family to be cursed, until a disabled heir should be born. Richard’s disability therefore records his family history of sexual and class oppression, while being offered in itself as an answer to these injustices.

Over the course of the novel, Richard struggles to come to terms with his disability, and after an abortive attempt to marry a neighbouring aristocrat’s daughter, he undertakes a ‘Rake’s Progress’ around Europe, giving himself up to dissipation and eventually being seduced by his immoral (and married) cousin, Helen de Vallorbes. At this point, however, Richard becomes disillusioned with his life of pleasure and returns home, and after learning of the family curse, and deciding to devote himself to philanthropic works and Christian socialism, marries his other cousin, the feminist ‘New Woman’ (and proto-lesbian), Honoria St Quentin.

Richard’s disability is finally shown to have brought him greater spiritual insight and a stronger sense of social responsibility than his peers; despite its innovative style and risqué subject matter, the novel ultimately advocates a form of Christian Socialism not totally unlike Charles Kingsley’s own, but underpinned by – rather than antithetical to – the experience of disability.

In this extract, Richard explains to his mother why he has decided that he must marry. In fact, the novel does not give Richard the son he longs for here; he and Honoria are shown to adopt their nephew, another Richard, as their heir.

[1] This was a term coined by the sexologist Richard Krafft-Ebing in his work Psychopathia Sexualis (1886), and developed by Havelock Ellis in his 1897 study Sexual Inversion. He suggested that homosexuality occurred when a man had a woman’s soul (and vice-versa) and should thus be understood not as a crime, but as a medical condition.
[2] Martha Stoddard Holmes, Fictions of Affliction (Ann Arbor: University of Michigan Press, 2004), pp.64-5.

‘You don’t consider that I am debarred from marriage?’

‘Oh no, no!’ Katherine cried, with a little sob in her voice. He looked at her steadily, with those profoundly desolate eyes.

If doubts arose within Katherine of the answer to that question, she crushed them down passionately. ‘No, my dearest, no,’ she declared. ‘It could not be wrong – it could not, could not be so – if she loved you, and you loved whomsoever you married.’

‘But I’m not in love – at least not in love with any person who can become my wife. Yet that does not seem to me to matter very much. I should be faithful, no fear, to anyone who was good enough to marry me. Enough of love would come, if only out of gratitude, towards the woman who would accept me as – as I am – and forgive that – that which cannot be helped.’

Again trembling shook Katherine. So terribly much seemed to her at stake just then! Silently she implored wisdom and clear-seeing might be accorded her. She leaned a little forward, and taking his left hand held it closely in both hers.

‘Dearest, that is not all. Tell me all,’ she said, ‘or I cannot quite follow your thought.’

Richard flung his body sideways across the bed, and kissed her hands as they held his. The hot colour rushed over his face and neck, up to the roots of his close-cropped, curly hair. He spoke, lying thus upon his chest, his face half buried in the sheet.

‘I want to marry because—because I want a child—I want a son,’ he said. [...] ‘My fate is fixed, you know. There’s no earthly use in wriggling. I am condemned to live a cow’s life and die a cow’s death. The pride of life may call, but I can’t answer. The great prizes are not for me. I’m too heavily handicapped. I was looking at that young fellow, Decies, to-night and considering his chances as against my own—— Oh! I know there’s wealth in plenty. The pasture’s green enough to make many a man covet it, and the stall’s well bedded-down. I don't complain. Only mother, you know—I know. Where’s the use of denying that which we neither of us ever really forget?—And then sometimes my blood takes fire. It did to-night. And the splendour of living being denied me, I—I—am tempted to say a Black Mass. One must take it out somehow. And I know I could go to the devil as few men have ever gone, magnificently, detestably, with subtleties and refinements of iniquity. [...] There should be a picturesqueness in my descent to hell which would go far to place my name at the head of the list of those sinners who have achieved immortality——‘

‘Richard! Richard!’ Lady Calmady cried, ‘do you want to break my heart quite?’

‘No,’ he answered, simply. ‘I’d infinitely rather not break your heart. I have no ambition to see my name in that devil's list except as an uncommonly ironical sort of second best. But then we must make some change, some radical change. At times, lately, I’ve felt as if I was a caged wild beast—blinded, its claws cut, the bars of its cage soldered and riveted, no hope of escape, and yet the vigour, the immense longing for freedom and activity, there all the while. [...] You see these few weeks in London—I’ve enjoyed them—but still they’ve made me understand, more than ever, all I’ve missed. Life calls, mother, do you see? And though the beast is blind, and his claws are cut, and his cage bolted, yet, when life calls, he must answer—must—or run mad—or die—do you see?’

‘And you shall answer, my beloved. Never fear, you will answer,’ Katherine replied proudly.

Richard’s hand closed hard upon hers.

‘Thank you,’ he said. ‘You were made to be a mother of heroes, not of a useless log like me.—And that’s just why I want to be good. And to be good I want a wife, that I may have that boy. I could keep straight for him, mother, though I’m afraid I can't keep straight for myself, and simply because it's right, much longer. I want him to have just all that I am denied. I want him to restore the balance, both for you and for me. I may have something of a career myself, perhaps, in politics or something. It’s possible, but that will come later, if it comes at all. And then it would be for his sake. What I want first is the boy, to give me an object and keep up my pluck, and keep me steady. I, giving him life, shall find my life in him, be paid for my wretched circumscribed existence by his goodly and complete one. He may be clever or not—I’d rather, of course, he was not quite a dunce—but I really don't very much mind, so long as he isn't an outrageous fool, if he’s only an entirely sound and healthy human animal.’

Richard stretched himself upon the bed, straightened the sheet across his chest, and clasped his hands under his head again. The desolation had gone out of his eyes. He seemed to look afar into the future, and therein see manly satisfaction and content. His voice was vibrant, rising to a kind of chant.

‘He shall run, and he shall swim, he shall fence, and he shall row,’ he said. ‘He shall learn all gallant sports, as becomes an English gentleman. And he shall ride,—not as I ride, God forbid! like a monkey strapped on a dog at a fair, but as a centaur, as a young demigod. We will set him, stark naked, on a bare-backed horse, and see that he’s clean-limbed, perfect, without spot or blemish, from head to heel.’”