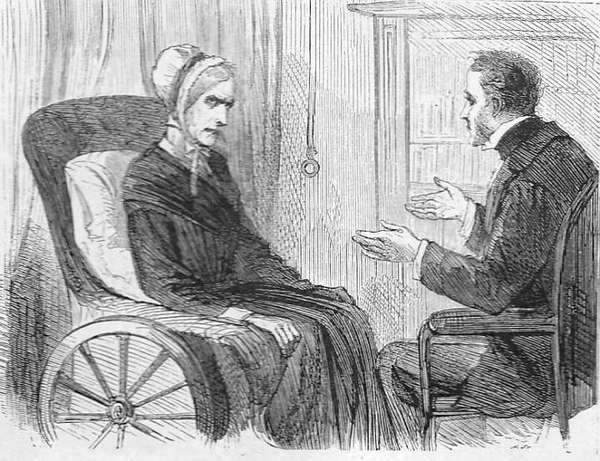 Little Dorrit, first published in monthly installments between 1855 and 1857, is arguably Charles Dickens's most disability-focused novel. In this later and darker work, Dickens uses the trope of disability to emphasize the disease—social, economic, and otherwise—threatening to debilitate London. The language of disability pervades the text—from the educator wryly named "Mr. Cripples" to the "maimed table" and "crippled wardrobe" (53) in the Clennam household to  the Clennam house itself, which appears to "[lean] on some half dozen gigantic crutches" and which ultimately collapses (46). Furthermore, there are countless references to characters with mobility impediments in various forms—from Giovanni Cavalletto's leg injury, which results from a collision with a Mail coach, to the train-like Pancks's allusion to the mobility challenges faced by men with wooden legs. These references call attention to the central figure of disability, Mrs. Clennam, who has not left her room for twelve years because of a "rheumatic affection" with "attendant debility or nervous weakness" (49) and who can only conduct business in her room because of the limited mobility afforded by her two-wheeled chair.  A variety of diseases plague the cityscape—bureaucratic inefficiency, epitomized in the Circumlocution Office; a mania for credit and speculation, attested to by the fantasies of those living in Bleeding Heart Yard and whose dangers are evidenced by Mr. Merdle's life and death; the social disease of poverty, whose effects are exacerbated, rather than diminished, by England's debtors' prisons—but the one that Dickens most prominently develops through the trope of disability is the moral and religious disease embodied by Mrs. Clennam, whose vengeful ire has poisoned her familial relations and whose hard-heartedness has seemingly rendered her "stony"—as the narrator says, "she lived and died a statue" (827)—and thus immobile.

Mrs. Clennam's unwillingness to forgive causes her body to become one of the many forms of prisons in the novel. To highlight her moral stagnation and rigidity, Dickens depicts her as rheumatic, with only slight mobility enabled by her wheeled chair. However, it is somewhat unclear whether Mrs. Clennam requires the use of a wheeled chair or whether it is a form of self-punishment, exacted because of her commitment to an Old Testament mode of justice. For when blackmailed by Mr. Blandois, she runs through the streets of London to secure the papers that would disclose her secret about her adopted son, Arthur Clennam. While she seems to attribute the feat to a sort of adrenaline—"This is not recovery; it is not strength; I don't know what it is" (822)—the excerpt selected here, with its reference to her "moving power" and her "swift and sudden action of her foot" (64), seems to grant Mrs. Clennam a mobility that is discordant with her bedridden state. In this excerpt we also see Mrs. Clennam raise her hand to protect herself from an imagined "blow" that might be read as her self-condemnation for her sins, which she might expiate, or at least contain, through self-imprisonment. Such a reading is troubling, to be sure, because it supposes Dickens to be using disability as a form of punishment for moral wrongs. However, it is not out of character for an author so heavily influenced by the nineteenth-century science of physiognomy to treat disability symbolically.[1]

Despite his co-optation of disability as trope, Dickens includes in Little Dorrit a quite profound meditation on the continuum of ability.[2] The narrator describes Mrs. Clennam's sickroom as the central meeting place of the "fellow travellers" who are a recurring image in the novel: "Which of the vast multitude of travellers . . . climbing the dusty hills and toiling along the weary plains, journeying by land and journeying by sea, coming and going so strangely, to meet and to act and re-act on one another, which of the host may, with no suspicion of the journey's end, be travelling surely hither?" (195). Here we see Dickens ruminating upon the suddenness with which one might arrive in the sickroom, for as the narrator says, "[T]he travellers to all are on the great high-road; but it has wonderful divergences, and only Time shall show us whither each traveller is bound" (196). By making it the space through which many of the central characters in Little Dorrit pass, even as visitors, Dickens reminds his reader of the transitory nature of ability. Thus, in a novel that plays with reversals between independence and dependence, we might also find Dickens commenting upon the fragility of ability. For as the sexton with his fixation on the birth, marriage, and death books housed in his church says, "[W]hat makes these books interesting to most people is—not who's in ’em, but who isn't—who's coming, you know, and when. That's the interesting question" (194). In these lines, Dickens's readers—fellow travellers on the road of life—are called to acknowledge their place on the continuum of ability. Although Dickens uses disability as trope in a problematic manner, his depiction of Mrs. Clennam and her sickroom challenges the consideration of ability and disability as discrete categories, thus showing his attitudes toward disability to be more complex than might be initially presumed.

[1] Nineteenth-century physiognomy encouraged the belief in a direct relationship between someone's facial features and his or her character. For more on this subject, see Sharrona Pearl's About Faces: Physiognomy in Nineteenth-Century Britain (Cambridge, MA: Harvard UP, 2010).

[2] In Enforcing Normalcy: Disability, Deafness, and the Body (London: Verso, 1995), Lennard Davis writes of this continuum of ability as follows: "Able-bodied (or temporarily able-bodied) people safely wall off the severely disabled so that they cannot be seen as part of a continuum of physical differences" (7). In other words, disability is not a fixed category; there is no "them" and "us," "able" and "disabled," as if disability were a binary term. Rather, it is a fluid identity, one that we might have at various points in life or through its entirety. According to Davis, the temporarily able-bodied, not wanting to face the fact that they, too, will be disabled one day, construct barriers—linguistic, ideological, and otherwise—to protect themselves from having to acknowledge this reality.

Still so recoiling in her chair that her overpoised weight moved it, from time to time, a little on its wheels, and gave her the appearance of a phantom of fierce aspect gliding away from him, she interposed her left arm, bent at the elbow with the back of her hand towards her face, between herself and him, and looked at him in a fixed silence.

'In grasping at money and in driving hard bargains—I have begun, and I must speak of such things now, mother—some one may have been grievously deceived, injured, ruined. You were the moving power of all this machinery before my birth; your stronger spirit has been infused into all my father's dealings, for more than two score years. You can set these doubts at rest, I think, if you will really help me to discover the truth. Will you, mother?'

He stopped in the hope that she would speak. But her grey hair was not more immoveable in its two folds, than were her firm lips.

There was a bell-rope hanging on the panelled wall, some two or three yards from the cabinet. By a swift and sudden action of her foot, she drove her wheeled chair rapidly back to it and pulled it violently—still holding her arm up in its shield-like posture, as if he were striking at her, and she warding off the blow.