The Royal Hospital for Incurables 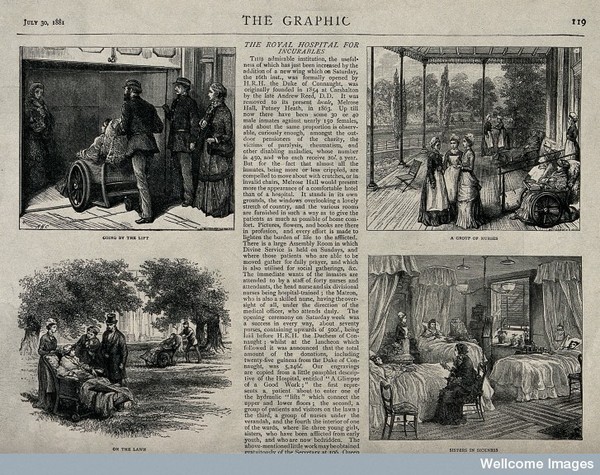 Four scenes from the Royal Hospital for Incurables at Putney Heath, London. Wood engraving, 1881.  Courtesy of the Wellcome Library, London under a Creative Commons License (Wellcome Library: ICV No 48264).

Published in 1881 in The Graphic, a widely distributed British newspaper, the following anonymously authored article, entitled “The Royal Hospital for Incurables,” and the engravings accompanying it, offer a sense of the kind of care that the disabled population in England received from privately-funded organizations throughout the long nineteenth century. Residents of The Royal Hospital for Incurables (founded by philanthropist Andrew Reed of Putney in 1854) were attended to by trained physicians when necessary, but they were also left free to roam the surrounding countryside and to enjoy the comforts of accommodating spaces of leisure like the verandah and the Assembly Room, which offered opportunities for what disability studies scholars would today term independent living. We can see from this particular series of images that while called a “hospital,” this institution was closer to what we would now call a  “home” for the disabled. It operated differently from most traditional, government-funded hospitals in England, in that it accepted only terminally ill and permanently disabled patients, who were an otherwise outcast population. Most hospitals in Britain tended to focus on treatment and therefore catered to “curable” cases. According to historian Ruth Richardson, who has written on The Middlesex Hospital in London, “it was important for [a] hospital to keep up a rolling programme of ‘successful’ care. To take in the dying, who would make the [hospital’s] statistics look poor, or those who might be a serious long-term drain on the institutions resources…would skew the [hospital’s] statistics in an undesirable direction” (Richardson 70). This was particularly a trend in workhouse infirmaries, where funding and resources were especially scarce. The Royal Hospital for Incurables was progressive, then, because it created a space for an “untreatable” class of patients in England.

Privately managed institutions for both the disabled and those with long-term illnesses sprung up around Great Britain and emerged as antidotes to this ethic of curable care. The Royal Hospital for Incurables is merely one example of many charities of this nature, including Reed’s sister institution, The Earlswood Asylum (founded in 1847), which was also known as the Asylum for Idiots. These institutions offered various levels of support; while The Royal Hospital for Incurables housed its patients permanently, other institutions arranged work opportunities for those those who could live at home, but who struggled to find accommodating jobs. The Baroness Angela Burdett-Coutts, a friend and benefactor of Victorian author Charles Dickens, established Brown’s Lane Sewing School, for example, which enlisted many disabled individuals to sew shirts for the army and navy and to work in an accepting and cooperative environment. Coutts took all unemployed people under her wing, but disabled Victorians were a population especially well-represented at her institution and at places like it.

This admirable institution, the usefulness of which has just been increased by the addition of a new wing which on Saturday, the 16th inst., was formally opened by H.R.H. the Duke of Connaught, was originally founded in 1854 at Carshalton by the late Andrew Reed, D.D. It was removed to its present locale, Melrose Hall, Putney Heath, in 1863. Up till now there have been some 30 or 40 male inmates against nearly 150 females, and about the same proportion is observable, curiously enough, amongst the outdoor pensioners of the charity, the victims of paralysis, rheumatism, and other disabling maladies, whose number is 450 [...]. But for the fact that almost all the inmates, being more or less crippled, are compelled to move about with crutches, or in invalid chairs, Melrose Hall would present more the appearance of a comfortable hotel than of a hospital. It stands in its own grounds, the windows overlooking a lovely stretch of country, and the various rooms are furnished in such a way as to give the patients as much as possible of home comfort. Pictures, flowers, and books are there in profusion, and every effort is made to lighten the burden of life to the afflicted. There is a large Assembly Room in which Divine Service is held on Sundays, and where those patients who are able to be moved gather for daily prayer, and which is also utilised for social gatherings. The immediate wants of the inmates are attended to by a staff of forty nurses and attendants, the head nurse and six divisional nurses being hospital-trained; the Matron, who is also a skilled nurse, having the oversight of all, under the direction of the medical officer, who attends daily […]. Our engravings are copied from a little pamphlet descriptive of the Hospital, entitled “A Glimpse of a Good Work;” the first represents a patient about to enter one of the hydraulic “lifts” which connect the upper and lower floors; the second, a group of patients and visitors on the lawn; the third, a group of nurses under the verandah, and the fourth the interior of one of the wards, where lie three young girls, sisters, who have been afflicted from early youth, and who are now bedridden.