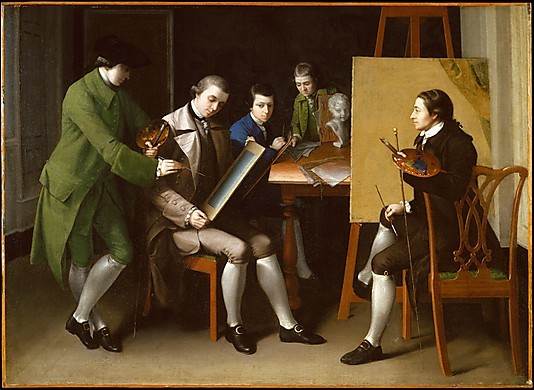 Pratt, Matthew. The American School, 1765, oil on canvas, 36 x 50 ¼”.  Image Courtesy Metropolitan Museum of Art. This painting depicts a group of students painting in Benjamin West’s London studio. The artist, Matthew Pratt, is seated at the easel, while West, at left wearing green, gives instructions to another young, unidentified artist.

Despite his resistance to the formal study of painting, William Dunlap’s time in Europe would prove critical to the history of American art because it was at West’s studio in London that Dunlap became acquainted with the foremost artists of the time. Dunlap is today best remembered as “the American Vasari,” after Giorgio Vasari (1511-1574), the 16th-century Italian biographer of Renaissance painters, as Dunlap would go on to write the first history of American art and artists, History of the Rise and Progress of the Art of Design in the United States, published in 1834.

The following excerpt, drawn from the Rise and Progress, recounts an exchange between two other American painters working under West in London, Gilbert Stuart (1755-1828) and John Trumbull (1756-1843), as related later by a third American, Thomas Sully (1783-1872). Dunlap’s decision to include this anecdote is likely informed by his own visual impairment, which is identical to that suffered by John Trumbull, described below.[1] Although Dunlap does not draw attention to this similarity here, elsewhere in the Rise and Progress and in his 1832 history of American theatre[2] Dunlap details the accident that rendered him blind in the right eye (see linked entry on Dunlap’s self-portraits). Curiously, however, in neither of these accounts does Dunlap suggest that his monocular vision limited his ability to draw in perspective. Instead, Dunlap notes multiple times in his published works that he found his sense of color wanting, possibly as a result of the accident, or, as he hypothesizes, “a natural defect.”[3] Nonetheless, Dunlap appears to use this anecdote, and particularly Sully’s criticism of Stuart’s theory, as a defense of painters, like Dunlap himself, who suffered from visual impairments.

[3] Dunlap, History of the Rise and Progress of the Arts of Design in the United States, 1:259. Also describes his difficulty with color on p. 250. It should be noted that the first widely acknowledged account of color blindness was not published until 1798 by the English physicist John Dalton. Dunlap was likely unaware of the possible genetic explanation for his condition, which may have been a partial color blindness. See: A E Emery, “John Dalton (1766-1844).,” Journal of Medical Genetics 25, no. 6 (June 1988): 422–26.

While Trumbull and Stuart were together as pupils of Mr. West, Stuart being the senior student, and more advanced in the art, Trumbull frequently submitted his works to him for the benefit of his remarks. Stuart told Mr. Sully, from whom we derive the anecdote, that on one occasion he was excessively puzzled by the drawing, “and after turning it this way and that, I observed, ‘Why, Trumbull, this looks as if it was drawn by a man with but one eye.’ Trumbull appeared much hurt, and said, ‘I take it very unkindly, sir, that you should make the remark.’ I couldn't tell what he meant, and asked him. ‘I presume, sir,’ he answered, ‘that you know I have lost the sight of one eye, and any allusion to it, in this manner, is illiberal.’ Now I never suspected it, and only the oddness of the drawing suggested the thing.” We have heard from Stuart’s companions in Boston, the same story, in nearly the same words, and when he told it to them, he went into a long dissertation on optics to prove, that a man, with but the sight of one eye, could not possibly draw truly. This notion Sully thought perfectly idle, and only one of Stuart’s whims, who could lecture most eloquently on any subject, from the anatomy of a man, to the economy of his shoe-tie.[1]

[1] Dunlap, History of the Rise and Progress of the Arts of Design in the United States, 1:182.

Dunlap, William. History of the Rise and Progress of the Arts of Design in the United States. Vol. 1. 2 vols. New York: George P. Scott and Company, Printers, 1834. Available at: https://archive.org/details/historyofrisepro01dunl.

William Dunlap, “History of the Rise and Progress of the Art of Design in the United States,” Nineteenth-Century Disability: Cultures & Contexts, accessed October 16, 2021, https://nineteenthcenturydisability.org/items/show/53.