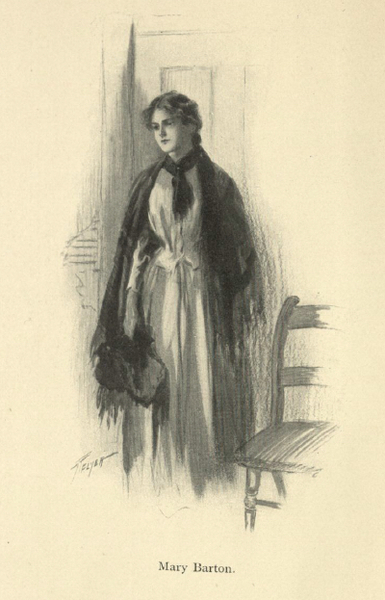 References to disability abound in Elizabeth Gaskell’s Mary Barton: A Tale of Manchester Life (1848): Margaret experiences progressive blindness from cataracts (though at the end of the novel she is said to regain her sight); the aging Alice becomes blind, deaf, and is eventually incapacitated by a paralytic stroke; and some of the hand-loom weavers are disfigured by vitriol attacks from the striking factory workers. But perhaps the most historically situated instance of disability in the novel is that experienced by Mrs. Jane Wilson, who is introduced to us as “a delicate, fragile-looking woman, limping in her gait” (7, ch. 1). As the passage below indicates, Mrs. Wilson received some sort of orthopedic injury that gave her a permanent limp while working in a factory. John Barton tells his daughter, Mary, that “[s]he cotched [caught] her side again a wheel” (87). Her injury likely resulted from contact with a flywheel, which the OED defines as “[a] wheel with a heavy rim, attached to a revolving shaft, in order either to regulate the motion of the machinery, or to accumulate power.”[i] Mr. Barton notes that the accident occurred “afore wheels were boxed up” (87), an apparent anachronism because according to Shirley Foster, editor of the 2006 Oxford World’s Classics edition of Mary Barton, the novel is supposed to be set around 1834-40 (ix), and the mandatory “boxing up” of wheels did not occur until the passage of the Factory Act of 1844.

Mrs. Wilson’s injury serves a larger function than drawing attention to factory reform, for it connects with the novel’s broader project of insisting upon the common bond of the Manchester factory workers and the mill owners—an interdependent relationship that, in her view, ultimately promoted the progress of society. In her preface, Gaskell explains that the factory worker and the mill owner are “bound to each other by common interests”—that the suffering of one must affect the other (3). In this worldview, the condition of a worker’s body discloses the successes or evils of industrialization, and a body injured in a factory incident would necessarily indict a physically harmful system of labor promoted by capitalism. Mrs. Wilson’s disability would thus present a problem to the middle-class reader: it would force the reader to confront his or her involvement in perpetuating a factory system that physically damaged human bodies.

“Didst thou mark how poorly Jane Wilson looked?” asked he, as they wound up their hard day’s work by a supper eaten over the fire, which glowed and glimmered through the room, and formed their only light.

“No, I can’t say as I did. But she’s never rightly held up her head since the twins died; and all along she has never been a strong woman.”[i]

“Never sin’ her accident. Afore that I mind her looking as fresh and likely a girl as e’er a one in Manchester.”

“She cotched her side again a wheel.[ii] It were afore wheels were boxed up. It were just when she were to have been married, and many a one thought George would ha’ been off his bargain; but I knew he weren’t the chap for that trick. Pretty near the first place she went to when she were able to go about again, was th’ Oud Church, poor wench, all pale and limping she went up the aisle, George holding her up as tender as a mother, and walking as slow as e’er he could, not to hurry her, though there were plenty enow of rude lads to cast their jests at him and her.”

[i] John Barton is alone with his daughter, Mary, discussing the appearance of Jane Wilson, wife of George Wilson. In a quite heartbreaking scene earlier in the novel, her twin boys pass away during their infancy from a fever, presumably typhoid.