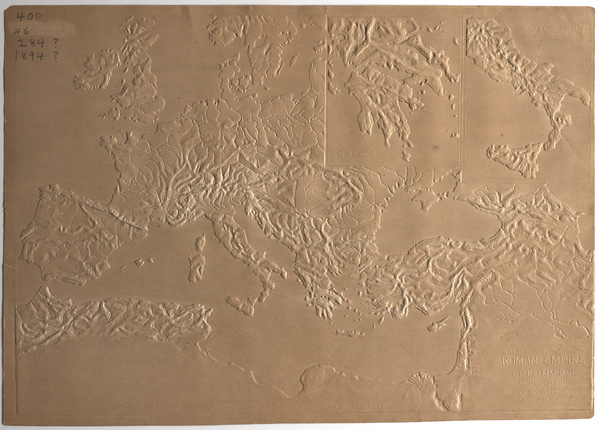 Printed tactile, or relief, maps began to be published during the early nineteenth century and were used to teach the sighted and the blind geography. Initially used in Europe, they were introduced into the United States by American educators who traveled to Europe to observe educational practices.[1] Influenced by his observations of the education of the blind in Europe, Samuel Gridley Howe (1801-1876) of the Perkins School for the Blind made printed tactile maps, such as his 1837 atlas of the United States that included the typography Boston Line Type, designed for the blind.[2] Likewise, Martin Kunz (1847-1923), the director of the Blind Institute at Illzack in Germany, also created printed tactile maps for the blind. However, his maps incorporated German Braille. A contemporary of Kunz, L. R. (Louis Richard) Klemm (1845-1925), superintendent of schools in Cleveland and Hamilton, Ohio, later worked for the United States Bureau of Education, specializing in foreign education, in Washington, DC in 1889.[3] He produced printed tactile maps in addition to other educational materials to engage sighted students kinesthetically, an educational strategy about which he learned in Europe and one that was successful for teaching the blind. His Relief Practice Map: Roman Empire (1894) that utilized raised typography in capital letters was created for the sighted but was also used by the blind. An announcement for his maps does not target a specific user other than students in general but provides details on the production and use of his maps: “In this series of blank maps the relief has been produced, on specially prepared paper, by pressure. It is intended that they should be filled in by the student with the names of places, rivers, lakes, mountains, etc. They are very portable, and seem well suited for use in schools.”[4] Klemm further details the construction of these maps in his “How To Make Durable Relief Maps,” and his European Schools; or, What I Saw in the Schools of Germany, France, Austria, and Switzerland (1890) offers insight into the genesis of his printed tactile maps. Moreover, his patent (no. 320,564 dated June 23, 1885) for his “Relief Map, Chart, &c.” includes the same figure that he displays in his aforementioned European Schools.

W. Hanks Levy’s Blindness and the Blind (1872) below reviews printed tactile maps in the US and Europe. He addresses accessibility issues regarding readability and expense of tactile maps for the blind. His critique illuminates the potential use of Klemm’s maps by the blind.

[1] Various types of maps have been used to teach the blind geography since the eighteenth century and likely earlier. Students made relief maps and “raised maps” constructed with cushions, pins, wire, glass, and string. The first maps the blind used “were on embroidered cloth or canvas, the needle-work representing the land and the plain cloth the water” with other embroidered details. Relief maps were constructed on paper or cardboard. See Joseph Stadelman, “Education of the Blind,” in The Catholic Encyclopedia, Vol. 5 (New York: Robert Appleton Company, 1909), accessed July 7, 2015. See also Sébastien Guillié, An Essay on the Instruction and Amusements of the Blind (London: Printed for Richard Phillips, 1819, reprint, London: Sampson Low, Marston and Company, 1894), 101-106. Wooden “dissected,” or puzzle, maps were also used to teach the sighted and the blind geography. See “Maps for the Blind: How They Are Manufactured and How Used,” The New York Times (New York, NY), Aug. 10, 1890.

[2] See Kimberly French, Perkins School for the Blind (Charleston, SC: Arcadia Publishing, 2004), 9-10, 13. Braille was not introduced into the United States until 1860 and was not adopted in the US until 1918. Because of the lack of standardization of typography for the blind and the various existent writing systems, the struggle that led to the universal acceptance of Braille became known as the “War of the Dots.” See French, 65-70.

Maps printed in relief from plates are necessarily much cheaper than those made by hand. In general the boundaries in printed maps are indicated by raised lines, and the towns marked by dots, no distinction being usually made between land and water. In those, however, printed by Dr. Howe, of Boston, U.S., the water is raised above the land, which injurious practice has been imitated by Mr. Moon ,[i] of Brighton, in some of his productions.

The idea of water being raised above land is so unnatural, that the mind never thoroughly becomes accustomed to it, and this produces constant irritation and uncertainty in consulting maps so arranged. The maps invented by Haüy,[ii] and still used in France, are made by hand. They are expensive and very inefficient. Herr Zeune,[iii] the director of “The Institution for the Blind” at Berlin, invented some years ago maps of very perfect construction; the various elevations on the surface of the earth being given on a regularly graduated scale: thus, if land one thousand feet above the level of the sea is represented on the map by a substance the tenth of an inch thick, land which is ten thousand feet above the level of the sea is indicated by a substance of the thickness of an inch. The utility of this invention in the case of institutions, and for the use of pupils of the wealthy classes is undoubted, but the costliness of maps constructed on such a principle places the advantages of the system beyond the reach of the blind generally. The mode adopted by Herr Zeune is so admirable that it has been employed in common schools, and it forms perhaps the only instance in which an invention, originally intended for the blind, has proved of signal advantage to the sighted.

[i] Completely blind by the age of twenty-one, William Moon (1818-1894) was an educator of the blind and developed Moon type, a raised typography for tactile reading.
[ii] Valentin Haüy (1745-1822) was founder of the first institute for the blind and developed an embossed printing system for the blind.
[iii] Johann August Zeune (1778-1853) founded the Berlin Foundation for the Blind.