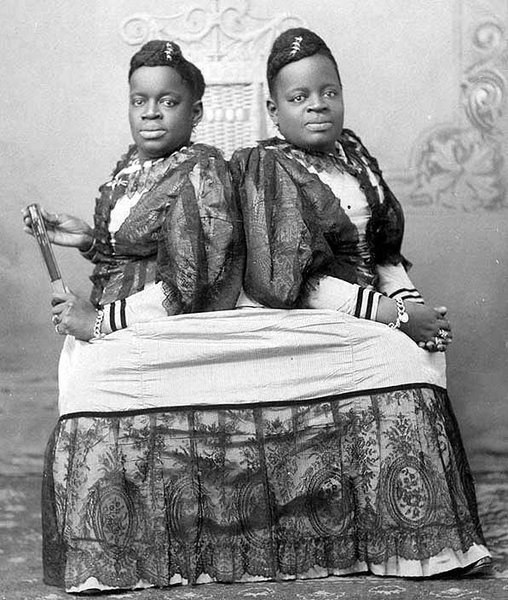 Michael A. Wesner.  Early to mid-1890s era cabinet photo of conjoined twins Millie and Christine McCoy, likely taken while they were on tour in California.  Image Courtesy Wikimedia Commons under a Creative Commons License.

Millie (left) and Christine (right) McKoy were born into slavery in Columbus County, North Carolina, in 1851. These conjoined twin sisters were sometimes called Millie-Christine McKoy. Each sister had two arms and two legs, but they were connected at the lower spine and shared one pelvis. Jabez McKay owned Millie and Christine, but the twins later adopted the last name, “McKoy.” McKay, who was concerned whether the twin sisters would be productive and frustrated when visitors flooded his farm to view their unusual anatomy, eventually sold Millie and Christine for $1,000 to a showman interested in exhibiting them. Millie and Christine ended up in the possession of Joseph Pearson Smith, who hired them out to various road shows. At this time Millie and Christine also appeared in P.T. Barnum's famed American Museum in New York City. The twins were kidnapped and taken to England by one of the men responsible for exhibiting them, but Smith eventually found the girls and, with their mother, sued to regain custody. He won this suit, and the twins returned to North Carolina.

Smith's wife taught Millie and Christine how to read, write, sing, dance, and play the piano; she also taught them to deliver recitations in German and French. The sisters used these skills when they were  exhibited. After the Civil War, the twins decided to remain with the Smiths. They continued to appear widely for nearly thirty years, even returning to England in 1871, where they performed for Queen Victoria. In the 1880s, the sisters joined Barnum's traveling circus, but they retired to Columbus County at the end of the decade. Throughout their career and retirement, Millie and Christine gave financial support to black schools and churches. When Millie died of tuberculosis in October 1912, doctors gave Christine morphine to help end her life quickly and painlessly.

Millie and Christine are central to our own understanding of the freak show as a place where a community secures its anxieties and questions about people that are perceived as different. As women of African descent, their display as “freaks” serves as an example of the conflation of race and disability and the perceived dependency of both women and people of African descent within nineteenth-century American culture.

There are giants and giants, dwarfs and dwarfs, fat men and women, living skeletons of both sexes, hirsute monsters and baldheads by the century; there are marvels of nature, science and art, of all which the world knows; but there can only be one NONPAREIL, one UNEQUALLED, and that is the subject of our brief sketch, for only one living creature is like Millie Christine, and her name is Christine Millie.

But, says the curious reader, was there ever such another heard of before?

Only one is on record, attested as a fact, and leaving out of the question fabulous monsters. The first year of the eighteenth century witnessed the birth of a similar phenomenon in Hungary, the sisters Helen and Judith, born in the year 1701. These girls were united at the lower part of the body only, and were perfectly distinct beings in every way. Helen was larger, stronger, and better-looking than Judith, besides being much more active and inteiligent. These girls lived to their twenty second year, when Judith fell sick and died, Helen following her within a few minutes of her demise. And all this, you remember, happened more than a century since, so that it takes Nature a hundred years at least to produce such a marvel again. Helen and Judith died at twenty-two years of age, while Millie Christine still lives, healthy and happy, at thirty-eight, and bids fair to attain a ripe old age as easily as less wonderful beings. The following pages, confined to a simple record of the facts in her career, will therefore prove of interest and value.

Miss Millie Christine, or Christine Millie, was born of slave parents, on the plantation of Mr. Alexander McCoy, near the town of Whiteville, Columbus County, North Carolina, on July 11, 1851. At her birth her mother was in her thirty-second year. She was a handsome woman, finely formed and in excellent health. Millie Christine's father, of Moorish descent, slender and sinewy, with the powerful activity characteristic of his race. Prior to the birth of Millie Christine, her mother had borne seven other children, five boys and two girls, all of ordinary size, with no peculiarities of conformation, and some of them are still alive.

The wonder of the family, Millie Christine, weighed seventeen pounds when she entered the world, and, although her mother was only attended by a colored midwife, no serious consequences attended such a remarkable birth.

But, when the child was once fairly in the world, how rumor flew about the township of Whiteville, and spread from thence over the whole country! "Have you seen the girl?" was the first question asked of every one by every one, and pilgrimages to visit her became all the rage in the country side.

The old nurse who had superintended her introduction into this world was doubtless awestruck at the anomalous and wonderful addition she had made to her master's property, and not unnaturally prided herself on having assisted Nature to produce a phenomenon; but the master himself, and his amiable lady, without stopping to question the designs of Providence, immediately surrounded the extraordinary infant with such care and attention as enabled it to thrive and grow. The dual-headed child was taken from the cabin to the mansion, and Mr. McCoy's family commenced then a course of care and attention to her health and welfare.

During the first eighteen months of her life nothing of importance occurred to Millie Christine worthy of note. She grew as other girls grow, learned to walk at twelve months old, was of a lively and agreeable disposition, and at fifteen months began to talk with both her mouths. She was cheerful and active as any girl of her age, with every appearance of robust health. Her vivacity and goodness, together, no doubt, with her peculiar formation, rendered her the almost idolized child of the mother and a general favorite of both old and young, and every attention and kindness was bestowed upon her.

At this time Mr. McCoy, being a man in very moderate circumstances, a plain farmer, thinking the girl would become a burden to him, and annoyed with the frequent visits of strangers to see her, determined to dispose of her. He was not long in finding for her a purchaser, a person of the name of Brower, who offered $10,000 for her, seeing the possibilities of the child in the way of an exhibition. But inasmuch as this Brower was not possessed of the requisite cash to back his faith, and only offered to give a note of hand for the purchase money, Mr. McCoy naturally desired some responsible person to whom to look for the money in case of the non-payment of the note when due. This person was ultimately found by Brower in Joseph P. Smith, of Wadesboro, North Carolina, and Mr. McCoy finally parted with Millie Christine, in consideration of Brower's note for $10,000 endorsed by Mr. Smith.

The happy Brower, in full possession of his prize, at once departed for New Orleans, in obedience to a request from the medical faculty of that city asking that she be brought there for a scientific examination.

Biographical Sketch of Millie Christine, the Carolina Twin, Surnamed the Two-Headed Nightingale and the Eighth Wonder of the World Cincinnati: Hennegan & Co. Print, [between 1902 and 1912]. Author unknown.