Lectures on the Nature and Treatment of Deformity 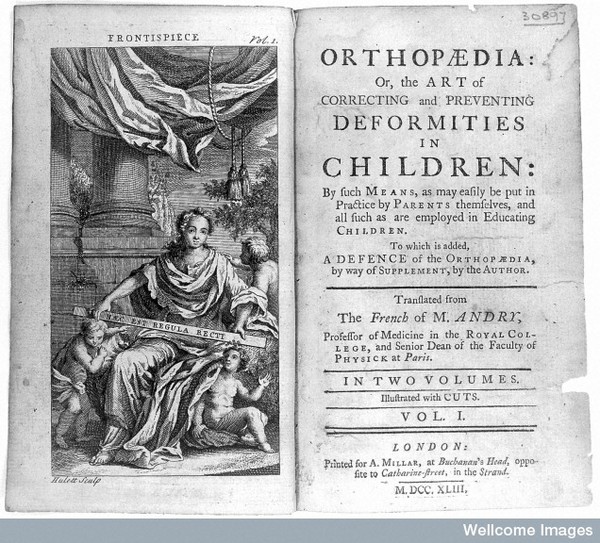 Frontispiece from Nicolas Andry's Orthopaedia. A woman swathed in the robes of a Greek goddess measures two children with a ruler that reads: “Haec est regula recti” (“This is the model of straightness”). Image Courtesy the Wellcome Institute for the History of Medicine under a Creative Commons License.

Orthopaedic medicine began as a general practice of child rearing in France with Nicolas Andry’s Orthopaedia (1741).  (Andry’s work was translated into English in 1743.)  In the mid-nineteenth century, orthopaedic medicine became a specialized branch of surgery that aimed to surgically correct asymmetries in the human frame, ranging from club foot to wry neck to hunch back. The Royal Orthopaedic Hopsital of London, which began as a small institution in Bloomsbury Square in 1838, had moved to Oxford Street by 1865, and treated over 1600 cases of “deformity of all kinds”, according to surgeon William Adams, annually.[1]

[1] William Adams.  Lectures on the Pathology and Treatment of Lateral and Other of Forms Curvature of the Spine. London: 1865, page 9.

[2] As disability studies scholars have noted, this overcoming narrative can have the pernicious effect of making it seem as though people with disabilities must achieve great success in order to compensate for a perceived lack.

[T]here is no higher pleasure, no greater distinction, no more exalted exercise of the human mind, than that profession which has for its object the benefit of our species, and the mitigation and removal of those ills to which all of mortal birth are subjected.  To the visitation of deformity this remark applies with double force, for the deformed have been regarded as loathsome in body, and depraved in mind; they have often isolated themselves from their fellow creatures; persecution of them has ever been sanctioned by the Mosaic ceremonial, which admitted the unblemished alone to the dignity of priesthood.  Possessing all the feelings, and susceptible of all the impulses which animate the breast of man, frequently morbidly sensitive from the consciousness of their deformity, adorned with genius, gifted with wit, graced by fortune and by birth, crowned with learning,--still is the deformed man exposed to the derision of the heartless, and is shut out from the world simply because nature has played some freak by which he differs from his fellow mortals.

Nevertheless, history records the names of many whose spiritual excellence overcame their bodily deformity:  Socrates, Aesop, Alexander the Great, whose head his said to have inclined slightly to the left shoulder, the illustrious Lord Burleigh, Pope, Talleyrand, Sir Walter Scott, Flaxman, and Byron, were all deformed in different degrees.[1]  I believe the sole instance recorded by the classic poets of female deformity is a woman named Kutila, who lived to be a hundred, she is spoken of by Pliny, and also by Juvenal.  A facetious Englishman, named Hay, has written an Essay on Bodily Deformity, in which he good-naturedly and sensibly vindicates those labouring under such an affliction from the stigma so ungenerously cast upon them.[2]  He was himself deformed.

[1] Socrates (c. 469-399 BC), an ancient Greek philosopher, was considered by some ugly to the point of deformity; Aesop (c. 620–564 BC), was an ancient Greek fabulist sometimes depicted as a hunchback; Alexander the Great (356-323 BC) was the King of Macedon who united Greece; Lord Burleigh (Robert Cecil, 1563-1812), a powerful Elizabethan politician, had a slight hunch back; Alexander Pope (1688-1744) a satirical English poet, had a hunch back; Charles Maurice de Talleyrand-Périgord (1754-1838), a politician and aristocrat who survived the French Revolution, had a clubfoot caused by Marfan syndrome; Walter Scott (1771-1832), nineteenth-century novelist, was lame; John Flaxman (1755-1826) a neoclassical sculptor, had a shoulder deformity; Lord Byron (1788-1824), a Romantic poet, was born with a club foot.

[2] Member of Parliament William Hay (1695-1755), who had a hunch back, wrote what is now considered the first personal memoir of deformity in 1754.  See William Hay.  Deformity: An Essay.  Ed. Kathleen James-Cavan. Victoria, BC: English Literary Studies, University of Victoria, 2004.

Tamplin, Richard William. Lectures on the Nature and Treatment of Deformities, Delivered at the Royal Orthopaedic Hospital, Bloomsbury Square. London: 1846.