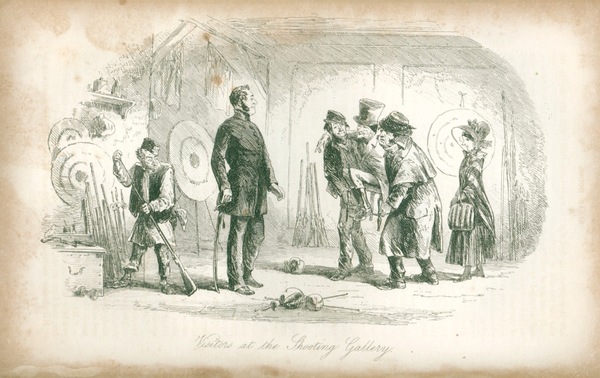 The illustration shows Grandfather Smallweed being carried in to a gallery, where he is met by Trooper George and his friend Phil Squod. “Visitors to the Shooting Gallery” by Hablot K. Browne. From Bleak House. London: Bradbury and Evans, 1853.

While many of Charles Dickens’s novels and nonfiction works depicted people with disabilities, his novel Bleak House, published serially over 1852-1853 and in volume form in 1853, is veritably full of characters with bodies and minds deemed disabled due to deafness, illness, epilepsy, senility, invalidism, asthma, gout, paralysis, injuries, and disfigurations. Interestingly, Dickens’s treatment of disability in the novel is neither wholly realistic nor wholly caricaturized: at times the novel reduces disabilities to symbols of a broken social system—as is the case with Grandfather Smallweed’s deafness and paralysis and his wife’s senility—while at others it exposes how the social environment of the person with disability produces the meaning of disability—as is often the case with Phil Squod and Esther Summerson’s respective disfigurements.

The selection below depicts one of the latter instances. In it, Phil Squod, who requires the support of the wall for getting around the room, describes the various injuries and events that gave him his many scars and mobility impairment. While the scarring and altered mobility originate in his working-class occupations, which might suggest symbolism of the exploitation of the working class, Phil’s description of his experience emphasizes the social interpretations of, and prejudices against, his disability, as well as his own delights in the abilities and appearance of his supposedly deficient body.

“Yes, commander, I took the business [of being a tinker]. Such as it was. It wasn’t much of a beat—round Saffron Hill, Hatton Garden, Clerkenwell, Smiffeld, and there—poor neighbourhood, where they uses up the kettles till they’re past mending. Most of the tramping tinkers used to come and lodge at our place; that was the best part of my master’s earnings. But they didn’t come to me. I warn’t like [my master]. He could sing ’em a good song. I couldn’t! He could play ’em a tune on any sort of pot you please, so as it was iron or block tin. I never could do nothing with a pot but mend it or bile it—never had a note of music in me. Besides, I was too ill-looking, and their wives complained of me.”

“They were mighty particular. You would pass muster in a crowd, Phil!” says the trooper with a pleasant smile.

“No, guv’ner,” returns Phil, shaking his head. “No, I shouldn’t. I was passable enough when I went with the tinker, though nothing to boast of then; but what with blowing the fire with my mouth when I was young, and spileing my complexion, and singeing my hair off, and swallering the smoke; and what with being nat’rally unfort’nate in the way of running against hot metal, and marking myself by sich means; and what with having turn-ups with the tinker as I got older, almost whenever he was too far gone in drink—which was almost always—my beauty was queer, wery queer, even at that time. As to since; what with a dozen years in a dark forge, where the men was given to larking; and what with being scorched in a accident at a gas-works; and what with being blowed out of winder, case-filling at the firework business; I am ugly enough to be made a show on!”

Resigning himself to which condition with a perfectly satisfied manner, Phil begs the favour of another cup of coffee. While drinking it, he says, “It was after the case-filling blow-up when I first see you, commander. You remember?”

“I remember, Phil. You were walking along in the sun.”

“True, Phil—shouldering your way on—”

“In a night-cap!” exclaims Phil, excited.

“And hobbling with a couple of sticks!” cries Phil, still more excited.

“With a couple of sticks. When—”

“When you stops, you know,” cries Phil, putting down his cup and saucer, and hastily removing his plate from his knees, “and says to me, ‘What, comrade! You have been in the wars!’ I didn’t say much to you, commander, then, for I was took by surprise that a person so strong and healthy and bold as you was, should stop to speak to such a limping bag of bones as I was. But you says to me, says you, delivering it out of your chest as hearty as possible, so that it was like a glass of something hot, ‘What accident have you met with? You have been badly hurt. What’s amiss, old boy? Cheer up, and tell us about it!’ Cheer up! I was cheered already! I says as much to you, you says more to me, I says more to you, you says more to me, and here I am, commander! Here I am, commander!” cries Phil, who has started from his chair and unaccountably begun to sidle away. “If a mark’s wanted, or if it will improve the business, let the customers take aim at me. They can’t spoil my beauty. I’m all right. Come on! If they want a man to box at, let ’em box at me. Let ’em knock me well about the head. I don’t mind. If they want a light-weight to be throwed for practice, Cornwall, Devonshire, or Lancashire,[1] let ’em throw me. They won’t hurt me. I have been throwed, all sorts of styles, all my life!”

With this unexpected speech, energetically delivered, and accompanied by action illustrative of the various exercises referred to, Phil Squod shoulders his way round three sides of the gallery, and abruptly tacking off at his commander, makes a butt at him with his head, intended to express devotion to his service. He then begins to clear away the breakfast.

[1] These refer to “codes of rules for wrestling,” differing in from county to county (961).