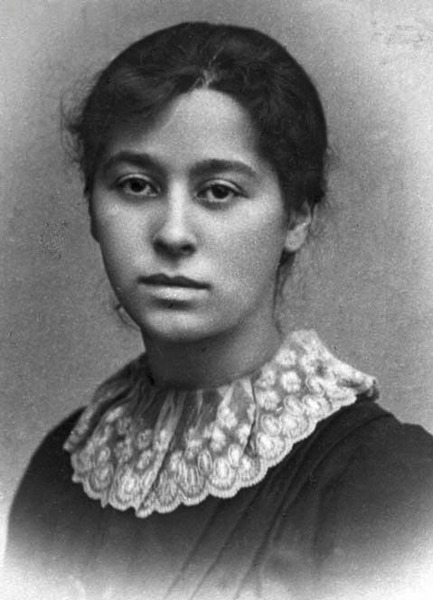 The black and white photograph shows the author looking directly into the camera. It was first published in Women’s World 3 (1890): 51, with the legend “From a Photograph by Montabone, Florence.” Image Courtesy Wikimedia Commons under a Creative Commons License.

The second poem in Amy Levy’s second published collection attests to her longstanding interest in mental illness. As a fin-de-siècle poet, essayist, and novelist, Levy (1861-1889) was one of the most prominent female voices for the significance of mental difference. Levy’s poetry consciously engages with a long line of mostly-male nineteenth-century authors, including Algernon Charles Swinburne, Robert Browning, and James Thomson. In doing so, she highlights earlier, less direct, engagement with mental illness that often goes unexplored.

“A Minor Poet,” first published in 1884, revolves around two perspectives. Readers meet the first speaker as he begins his third suicide attempt.[1] The first two attempts may have been unsuccessful, but he has high hopes for “luck in threes” (3). The second speaker, a friend by the name of “Tom Leigh,” appears early in the text, but readers only hear his perspective in the epilogue, when he discovers the first speaker’s remains.

The excerpted passages below highlight Levy’s interest in interpretations of the non-normative mind. “A Minor Poet” considers why someone would commit suicide, how it might feel to perceive the world from within such a mind, and if it is possible to form a generalizable answer for either question. Tom Leigh underscores how much “talk” has taken place as observers try to interpret the suicide (115). Women, apparently, tend to blame personal pain, while men cite professional grievances. Even Tom begins the poem by trying to use philosophy to reason the nameless speaker out of his melancholy.

In contrast, the main speaker of the poem resists the observers’ desire to pin a motivation on his suicidal intent. Instead, he focuses on sensation and how it feels to be, first, out of sync with the world and, then, to leave it entirely. The speaker teaches his readers about what it means to see, hear, touch, and desire as “[a] blot, a blur, a note/ [a]ll out of tune in this world’s instrument” (54-5). In doing so, he not only offers a window into a single mind, but also destabilizes the assumption that there must be a logical reason behind the speaker’s actions. By the end of the epilogue, it seems that Tom has come to a similar conclusion. After a list of potential reasons for his friend’s suicide, he refuses to offer his own interpretation and, instead, ends his text with a question.

[1] One year before this collection, Levy published an essay entitled “James Thomson: A Minor Poet.” As such, the first speaker has been read as representing both Thomson and Levy herself.

Was ever Hell conceived
By mortal brain, by brain Divine devised,
Darker, more fraught with torment, than the world
For such as I? A creature maimed and marr’d
From very birth. A blot, a blur, a note
All out of tune in this world’s instrument.
A base thing, yet not knowing to fulfil
Base functions. A high thing, yet all unmeet
For work that’s high. A dweller on the earth,
Yet not content to dig with other men
Because of certain sudden sights and sounds
(Bars of broke music; furtive, fleeting glimpse
Of angel faces ’thwart the grating seen)
Perceived in Heaven. Yet when I approach
To catch the sound’s completeness, to absorb
The faces’ full perfection, Heaven’s gate,
Which then had stood ajar, sudden falls to,
And I, a‐shiver in the dark and cold,
Scarce hear afar the mocking tones of men:
“He would not dig, forsooth; but he must strive
For higher fruits than what our tillage yields;
Behold what comes, my brothers, of vain pride!”

We knocked and knocked; at last, burst in the door,
And found him as you know—the outstretched arms
Propping the hidden face. The sun had set,
And all the place was dim with lurking shade.
There was no written word to say farewell,
Or make more clear the deed.

Meantime there is much talk about my friend.
The women say, of course, he died for love;
The men, for lack of gold, or cavilling
Of carping critics. I, Tom Leigh, his friend
I have no word at all to say of this.
Nay, I had deem’d him more philosopher;
For did he think by this one paltry deed
To cut the knot of circumstance, and snap
The chain which binds all being?