Life in the Sickroom 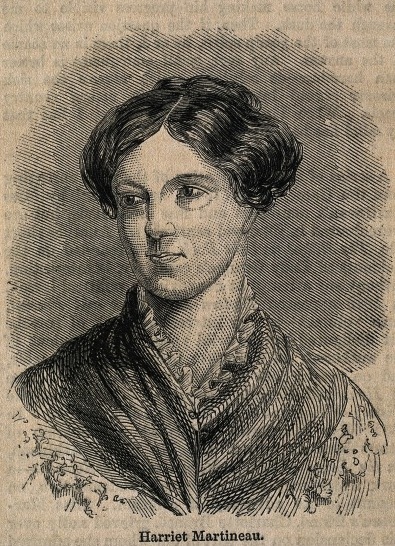 A wood engraving shows Harriet Martineau gazing toward the left, with a shawl wrapped around her shoulders. R. Burgess, Portraits of doctors & scientists in the Wellcome Institute, London 1973.  Courtesy of the Wellcome Library, London under a Creative Commons License (Wellcome Library no. 1929.1).

Harriet Martineau (1802-1876) was a writer and intellectual of the Victorian period. She was best known for her work on political economy, but she was also deaf from childhood and an invalid for six years. She wrote about both of these experiences in her “Letter to the Deaf” (1834) Life in the Sickroom (1844) and her autobiography (1877).

Life in the Sickroom is one of many first-hand accounts of the experience of being ill written by an invalid.  Martineau was ill for six years, but she found taking on the identity of an invalid a reprieve from the stresses of daily life.  What is interesting about her account, then, is that rather than depicting the difficulties of being ill, she portrays life in the sickroom as a time of rest and reflection, a welcome repose that can lead to time for thought and greater insight. Nor was she unusual in this respect.  Miriam Bailin points out that many Victorians valued illness for the rest and repose it could offer from the stresses of daily life, and that it is perhaps not surprising that the cult of the invalid developed in the wake of the Industrial revolution alongside the “coexistent imperatives of self-discipline, will-power and industriousness” (12).

Martineau dedicates her work to fellow-invalids whom she imagines will be sympathetic to her experiences in the sickroom, and to her claim that suffering can afford invalids greater insight, especially about the transience of this world. This type of dedication is typical of Victorian writing about invalidism.  As Maria Frawley points out, many Victorian invalids who wrote first-person narratives about their experiences portrayed themselves as lonely sufferers seeking from their “own bed of affliction to console others, envisioned as similarly confined to their sickrooms and in need of solace” (11).  In the following two excerpts, from the chapters on “Life to the Invalid” and the “Power of Ideas in the Sick-Room,” Martineau reflects on invalid’s heightened ability to grasp truisms that may seem farther off to the healthy:  that wealth and status are unimportant, and that it matters less what we do than what we are.

[from “Dedication”]: I do not believe it is possible for persons in health and action to trace, as we can, the agencies for good that are going on in life and the world.  Or, if they can, it seems as if the perception were accompanied by a breathless fear,--a dread of being, if not crushed, whirled away somewhere, hurried along to new regions for which they are unprepared, and to which, however good, they would prefer the familiar.  You and I, and our fellow-sufferers, see differently, whether or not we see further. We know and feel, to the very centre of our souls, that there is no hurry, no crushing, no devastation attending Divine processes.  While we see the whole system of human life rising and rising into a higher region and a purer light, we perceive that every atom is as much cared for as the whole.  While we use our new insight to show how things are done,--and gravely smile to see that it is by every man’s overrating the issues of his immediate pursuit, in order that he may devote all his energies to it, (without which nothing would ever be done,) we smile with another feeling presently, on perceiving how an industry and care from above are compensating to every man his mistake by giving him collateral benefits when he misses the direct good he sought,--by giving him and his helpers a wealth of ideas, as often as their schemes turn out, in their professed objects, profitless.  When we see men straining every nerve to reach the tempting apples which are to prove dust and ashes in their jaws, [xiv] we see also, by virtue of our position, the flying messenger who is descending with the ambrosia which is to feed their immortal part.  We can tell that while revolutions are grandly operating, by which life and the world will in time change their aspect,--while a progress is advancing which it is now scarcely conceivable that we should ever have dreamed of putting our hands,--there is not one of our passing thoughts that is not ordained,--not a sigh of weariness unheeded—not an effort of patience that is not met half-way by divine pity,--not a generous emotion of triumph in the world’s improvement that is not hallowed by the divine sympathy ever living and breathing round about us.  This is our peculiar privilege, of seeing and feeling something of the simultaneous vastness and minuteness of providential administration, is one in which we most enjoy sympathy;--at least, I do:--and in this, therefore, do I find your undoubted fellowship most precious.

[From “Life to the Invalid”] Nothing is more impossible to represent in words, even to one’s self in meditative moments, than what it is to lie on the verge of life and watch, with nothing to do but think, and learn from what we behold.  Let any one recall what it is to feel suddenly, by personal experience, the full depth of meaning of some saying, always believed in, often repeated with sincerity, but never till now known.  Everyone has felt this, in regard to some one proverb, or divine scriptural clause, or word of some right royal philosopher or poet.  Let any one then try to conceive of an extension of this realization through all that has ever been wisely said of man and human life, and he will be endeavouring to imagine our experience.  Engrossing, thrilling, overpowering as the experience is, we have each to bear it alone; for each of us is surrounded by the active and the busy, who have a different gift and a different office;--and if not, it is one of those experiences which are incommunicable.  If we endeavour to utter our thoughts on the folly of the pursuit of wealth, on the emptiness of ambition, on the surface nature of distinctions of rank, &c. we are only saying what our hearers have had by heart all their lives from books […]

[From the “Power of Ideas in the Sickroom”] If I were asked whether there is any one idea more potential than any other over every sort of suffering, in a mode of life like ours, most hearers of the question would make haste to answer for me that there is such a variety of potential ideas, suited to such wide differences of mood of mind and body, that it must be impossible to measure the strength of any one.  Nevertheless, I should reply that there is one, to me more powerful at present than I can now conceive any single idea to have been in any former state of mind.  It is this; that it matters infinitely less what we do than what we are.  I can conceive the amazement of many at this announcement,--of many even who admit its truth, and feelingly admit it, as I myself did when it was first brought home to me from the printed page of one friend by the heart-breathing voice of another.  I care not who wonders, and who only half understands, while there are some few to whom this thought may be what it is to me.  No one will be so short-sighted as to apply it as an excuse for indolence in the active and healthy,--so clear is it that such cannot be what they ought to be, unless they do all they can.  But perhaps it is only the practiced in human sorrows who can see far enough into the boundless truth of this thought to appreciate its worth to us.  Suffice it here that it has the power I ascribe to it, and that we whom it has consoled long to administer it when we see old age restless in its infirmity, activity disappointed of its scope or instruments, or the most useful agents of society, the most indispensable members of families paralysed by disease.  We long to whisper it in the dungeons of Spielberg,[1] where it opens a career within the narrowest recess of those thick walls.  We long to send a missive to every couch of the sick, to every arm-chair of the aged and the blind, reminding them that the great work of life is ours still,--through all modes of life but that of the madhouse,[2]--the formation of a heavenly soul within us.  If we cannot pursue a trade or a science, or keep house, or help the state, or write books, or earn our own bread or that of others, we can do the work to which all this is only subsidiary,--we can cherish a sweet and holy temper,--we can vindicate the supremacy of mind over body,--we can, in defiance of our liabilities, minister pleasure and hope to the gayest who come prepared to receive pain from the spectacle of our pain; we can, here as well as in heaven’s courts hereafter, reveal the angel growing into its immortal aspect, which is the highest achievement we could propose to ourselves, or that grace from above could propose to us, if we had a free choice of all possible conditions of human life.

[1] Dungeons of Spielberg: Silvio Pellico (1789-1854), an Italian author, was arrested by Austrian officials under the charge of belonging to the carbonari (meaning a secret revolutionary society in early nineteenth-century Italy) and put in a prison at Spielberg. There he wrote Le mie prigioni (“My Prisons”) about his determination to live a Christian life in prison. His work was widely translated and inspired sympathy for the unification of Italy. In alluding to him, Martineau suggests that a life of confinement, be it from imprisonment or illness, can lead to the development of a Christian temperament.

[2] Martineau’s exclusion of those in the madhouse from her message suggests that she sees the insane as a limit case of who could be consoled by the ability to keep a “sweet and holy temper” in the absence of the ability to do anything else.