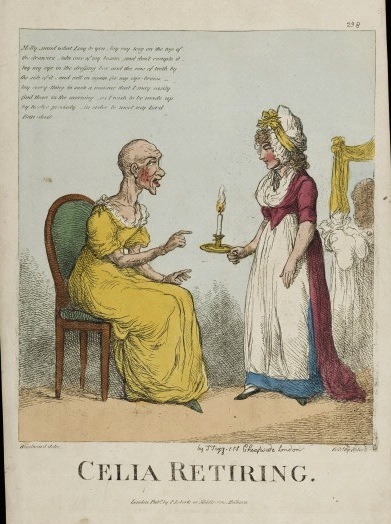 The colour sketch shows a lady retiring to bed and ordering her maid to look after her artificial aids to beauty (wig, teeth, glass eye etc.), entitled “Celia Retiring” by P. Roberts (after G.M Woodward). Coloured etching, 1807. Courtesy of the Wellcome Library, London under Creative Commons License (Wellcome Library no. 662684i).

Anthony Trollope's The Bertrams (1859) is a rare example of a nineteenth-century novel that depicts a one-eyed female character. Whereas male characters that have missing eyes appear frequently elsewhere in nineteenth-century British literature—thinking, for instance, of Mr. Squeers from Charles Dickens’s Nicholas Nickleby(1838-39), Mr. Pinto from William Makepeace Thackeray’s short story“The Notch on the Ax: A Story a la Mode” (1862) and M. Laferté from George du Maurier’s The Martian(1897) to name but a few—Trollope’s text includes a character that, despite her sex, aligns with several of the common negative characteristics that were associated with one-eyed men and ocular prosthesis wearers in this period. The minor character, Miss Ruff, who is a regular visitor to Littlebath in Trollope’s tale (the home of well-to-do spinster Miss Todd), is indeed a wearer of an artificial eye and like many of the male characters described elsewhere in Victorian fiction, is portrayed in a far from flattering manner. Despite resisting associating the deformed with criminality in this text, which was often the case in relation to the one-eyed male character, Trollope does, however, depict Miss Ruff as someone who is as ugly in character as she is in appearance. In fact, though to a less extreme extent, like the sinister schoolmaster Mr. Squeers from Dickens’s novel, Miss Ruff is portrayed as somewhat villainous and, considering her excessively aggressive card-play, to some extent violent. Significantly, the tale also reveals the gender-specific social difficulties that faced Victorian one-eyed women.

Written at a time when artificial eyes were becoming more user-friendly and increasingly accurate-looking replacements for the human eye, Trollope’s text can, to some extent, be read as a critique of contemporary ocular prostheses due to the very fact that Miss Ruff is a recognisable user of a glass eye: the primary aim of the artificial eye maker was to produce a device that could as accurately as possible mimic the appearance of a real eye, making the wearer’s loss unperceivable thus alleviating unwanted attention and stigma. While significant and well-publicised developments in artificial eye technology were made in the 1840s, 50s and 60s—most notably by French prosthetist Auguste Boissonneau, who pioneered the production of ergonomically designed bespoke enamel artificial eyes—Trollope’s text suggests that ocular prostheses could still easily be distinguished from their natural counterpart. In fact, the very flaws in Miss Ruff’s prosthesis add to her abhorrent demeanour: the “fixed” position of her eye is a physical manifestation of the intensity and harshness that she displays behaviourally in her aggressive card-play.

For one-eyed women, ocular prosthesis use has long been associated with aging, abhorrence and spinsterhood. Jonathan’s Swift’s satirical poem “A Beautiful Young Nymph Going to Bed“ (1731), Louis-Léopold Boilly’s painting “Les epoux assortis” (1825; available to view at Wellcome Images) and G.M Woodward’s “Celia Retiring” (1803; see image above) are just three examples that exemplify this point. As it would appear, Trollope reaffirms these connotations with his depiction of Miss Ruff. An unwanted ever-present at the whist table, Miss Ruff’s glass eye can be read as both a reason for and signifier of her old age and spinsterhood. Since such a premium was placed on physical appearance and maternal function, women with deformities, especially those with visible physical disfigurements, often occupied a marginalised position within society. In Miss Ruff’s case, her obvious use of an artificial eye is a visual signifier for her inability to attract a male suitor; it could, in fact, be the very reason why she remains single. Trollope further emphasises her unsuitability for marriage by enamoring her with a number of unattractive traits—sternness, competitiveness, rudeness and aggressiveness—which reaffirm the prejudices against bodily difference which were rife during this period.

A lion-hearted old warrior was Miss Ruff,—one who could not stand with patience the modern practice of dallying in the presence of her enemies' guns. She had come there for a rubber of whist[1]—to fight the good fight—to conquer or to die, and her soul longed to be at it […]

“That Miss Ruff is dreadful.” Here an awful note was heard, for the Lady Ruth had just put her thirteenth trump on Miss Ruff's thirteenth heart. What Littlebathian female soul could stand that unmoved?

“Oh, dear! that poor old woman!” continued Miss Todd. “You know one lives in constant fear of her having a fit. Miss Ruff is horrible. She has a way of looking with that fixed eye[2] of hers that is almost worse than her voice.” The fact was, that Miss Ruff had one glass eye. “I know she'll be the death of that poor old creature some of these days. Lady Ruth will play, and she hardly knows one card from another. And then Miss Ruff, she will scold. Good heavens! do you hear that?”

“It's just seven minutes since I turned the last trick of the last hand,” Miss Ruff had said, scornfully. “We shall have finished the two rubbers about six in the morning, I take it.”

“Will your ladyship allow me to deal for you?” said Mr. Fuzzybell, meaning to be civil.

“I'll allow you to do no such thing,” croaked out Lady Ruth. “I can deal very well myself; at any rate as well as Miss Ruff. And I'm not the least in a hurry;” and she went on slobbering out the cards, and counting them over and over again, almost as each card fell [. . .]

This was dreadful to Miss Ruff. Here had her rival played two rubbers, won them both, pocketed all but a sovereign[3], and was again at work; while she, she was still painfully toiling through her second game, the first having been scored against her by her partner's fatuity in having trumped her long heart. Was this to be borne with patience? “Lady Ruth,” she said, emitting fire out of her one eye, “do you ever mean to have done dealing those cards?”

Lady Ruth did not condescend to make any answer, but recommenced her leisurely counting; and then Miss Ruff uttered that terrific screech which had peculiarly excited Miss Todd's attention.

[. . .] The table at which Lady Ruth and her party were sitting—we ought rather to say, Miss Ruff and her party—was in one corner of the room, and our friends had placed themselves on a cushioned seat fixed against the wall in this very corner. Things were still going badly with Miss Ruff. As Sindbad carried the old man, and could not shake him off, so did Miss Ruff still carry Lady Ruth Revoke; and the weight was too much for her.

She manfully struggled on, however—womanfully would perhaps be a stronger and more appropriate word. She had to calculate not only how to play her own hand correctly, but she had also to calculate on her partner's probable errors. This was hard work, and required that all around her should be undisturbed and silent [. . .]

The quarrelling had been going on unabated, but that had caused little surprise. It is astonishing how soon the ear becomes used to incivilities. They were now accustomed to Miss Ruff's voice, and thought nothing of her exclamations. “Well, I declare—what, the ten of spades!—ha! ha! ha! well, it is an excellent joke—if you could have obliged me, Lady Ruth, by returning my lead of trumps, we should have been out,” &c., &c., &c. All this and more attracted no attention, and the general pity for Lady Ruth had become dead and passive.

But at last Miss Ruff's tongue went faster and faster, and her words became sharper and sharper. Lady Ruth's countenance became very strange to look at. She bobbed her head about slowly in a manner that frightened Mr. Fuzzybell, and ceased to make any remark to her partner. Then Mrs. Garded made two direct appeals to Miss Ruff for mercy.

But Miss Ruff could not be merciful. Perhaps on each occasion she refrained for a moment, but it was only for a moment; and Mrs. Garded and Mr. Fuzzybell ceased to think of their cards, and looked only at the Lady Ruth; and then of a sudden they both rose from their seats, the colonel, as we have said, rushed across the room, and all the players at all the tables put down their cards and stood up in alarm.

Lady Ruth was sitting perfectly still, except that she still bobbed her old head up and down in a strange unearthly manner. She had about ten cards in her hand which she held motionless. Her eyes seemed to be fixed in one continued stare directly on the face of her foe. Her lower jaw had fallen so as to give a monstrous extension to her cadaverous face. There she sat apparently speechless; but still she bobbed her head, and still she held her cards.

It was known at Littlebath that she had suffered from paralysis, and Mrs. Garded and Mr. Fuzzybell thinking that she was having or about to have a fit, naturally rushed to her assistance.

[. . .] “Do you feel yourself ill, Lady Ruth?” said Miss Todd. But her ladyship answered nothing.

It seemed, however, that her ladyship could walk, for with her two supporters she made her way nearly to the door of the room. There she stood, and having succeeded in shaking off Sir Lionel's arm, she turned and faced round upon the company. She continued to bob her head at them all, and then made this little speech, uttering each word very slowly.

“I wish she had a glass tongue as well, because then perhaps she'd break it.” And having so revenged herself, she suffered Miss Todd to lead her away into the bedroom. It was clear at least that she had no fit, and the company was thankful. (359-80)

[1] Whist is a card game that was popular throughout the eighteenth and nineteenth centuries. It was derived from the older game “Ruff and Honours”, perhaps explaining Miss Ruff’s name. Rubber refers to a scoring system that decides the winner, meaning the best of three—that is, the winner is the first player to win two games.

[2] One of the major flaws in early ocular prosthesis was that shell design artificial eyes (curved shells of glass or enamel that would rest upon the surface of an atrophied eye) were often ill-fitting, or had sharp edges which restricted their range of movement and caused damage to surrounding tissue. It was rare for eyes to be surgically removed (enucleated) at this time—prior to improvements in anatomical knowledge and surgical procedure enucleation was extremely dangerous—and so shell design eyes were by far the most common forms of ocular prosthesis available. For more on the medical, technological and commercial history of artificial eyes, see Katherine Ott’s“Hard Wear and Soft Tissue: Craft and Commerce in Artificial Eyes” in Katherine Ott, David Serlin and Stephen Mihm’s (eds.) Artificial Parts, Practical Lives: Modern Histories of Prosthetics (New York: New York University Press, 2002), 147-71.

[3] A sovereign was a £1 coin. For more on Victorian currency, see Marje Bloy’s “British Currency before 1971” on The Victorian Web.