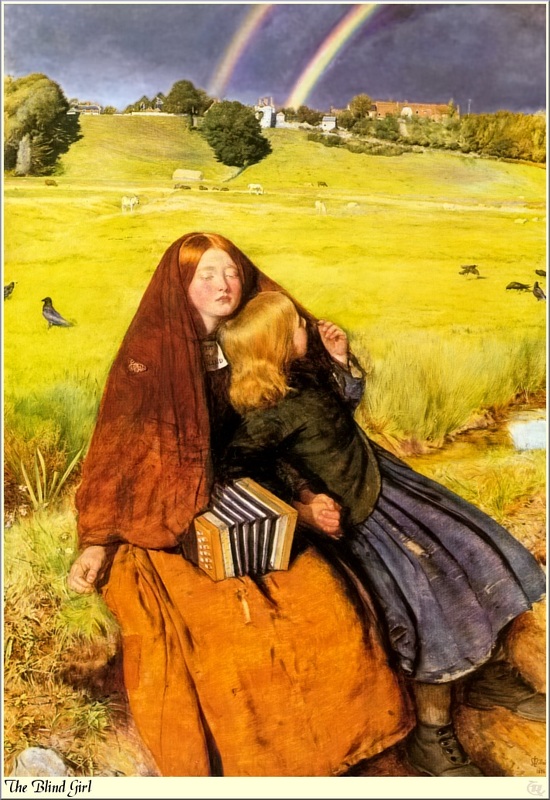 The Blind Girl (1856) by John Everett Millais. Image in the public domain courtesy of Wikimedia Commons.

John Everett Millais’s (1829-1896) The Blind Girl (1856) shows a blind musician with a concertina in her lap, and a little girl, presumed to be her sister, resting on the roadside after a rainstorm. They are on their way toward Winchelsea, whose church appears on the hill-top in the background (Flint 75). With its idyllic rural landscape, this pre-Raphalite painting presents a more romanticized version of the life of a blind beggar than its contemporary, Henry Mayhew’s London Labour and the London Poor. Millais’s painting draws on a long Christian tradition of reading blind people as both blessed and afflicted by their lack of sight: while the blind may face practical difficulties in navigating a world set up for the sighted, as well as missing out on visual pleasures, as people less enmeshed in the material world, they may closer to the spiritual world and to God. This tension between the material and the spiritual is reflected in the painting itself, which is an object of visual pleasure but also a reminder to the viewer, with its autumnal setting, of the decay of this world and the importance of the next world. The little girl acts as both an interpreter of the scene for the blind girl and a stand-in for the viewer, who appreciates the double rainbow that the blind girl cannot see. Meanwhile, the blind girl’s upturned face and partially closed eyes suggest that she is contemplating higher things while resting and enjoying the sunshine. The forget-me-nots in the lower left-hand corner act as a reminder to the viewer not to forget, and perhaps hint at the cruelty of the blind girl’s lost ability to see them in bloom (Flint 75). The viewer is thus encouraged to both pity the blind girl and appreciate her spirituality. Kate Flint argues that the painting “may be seen as a contribution to a developing discourse which set the visibility and the epistemological certainties of the material, industrial world, blindly self-regarding in its own pride in its achievements, against the higher worth of divine illumination” (82).

Millais's oil painting shows a blind musician and her sister resting on the roadside after a storm.  Green hills and pasture make up the middleground, a double rainbow and a town can be seen in the distance. Millais, John Everett.  The Blind Girl. 1856.  Birmingham Museums and Art Gallery.  Web. August 2012.