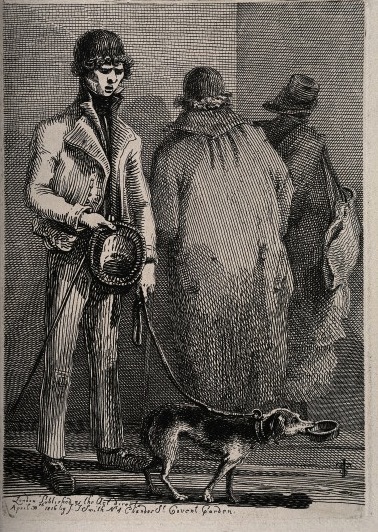 In this black and white etching, a blind beggar walks past two figures guided by his dog, who carries a begging bowl. Etching by J.T. Smith, 1816. Courtesy Wellcome Library, London under a Creative Commons License (Wellcome Library no. 16453i).

When Arthur Symons (1865-1945) published his sonnet “The Blind Beggar” in 1892, he added to an already large body of literature that links the experience of visual disability with begging.  Noteworthy among texts from the period that portray blind beggars is William Wordsworth’s posthumously published autobiographical poem The Prelude (1805, 1850). Whereas Wordsworth’s sighted speaker experiences an epiphany about the limitations of human knowledge while looking at a blind man, Symons’ speaker is far less assured and comes away from his encounter with a blind beggar with questions instead of answers.  Whereas for Wordsworth’s speaker, the blind man is useful both for how he prompts the speaker to greater insight and for the way in which he conveniently embodies human experience, for Symons’ speaker, the encounter with a blind man prompts him to wonder about the mental and emotional life of the blind man and about the blind man’s experience of social isolation.  Interested both in the experience of sensory disability and in the social marginalization and financial dependency that the poem attributes to the beggar’s disability, the speaker leaves the questions he asks unanswered.   He produces, nonetheless, a detailed, predictable and problematic portrait of the blind beggar.  The beggar, who is characterized by both the poem’s final word, “misery,” and by the thrice-repeated adjective “patient,” is isolated from the carefree crowd, described as “the glad unheeding Fair.”  Symons’ characterization of the blind man as passive is most apparent, and most troubling, in a simile that compares the blind man to a corpse.  Imagining the sensory experiences of a blind person, Symons’ speaker proposes that the blind man “hears/ In darkness, as a dead man in his shroud.”  While the simile enacts a doubling of the blind man’s disability, suggesting that the blind man can neither see nor hear, it is most remarkable for its disturbing identification of disability with death.

The poem, characterized by its mix of dehumanizing and empathetic statements, is usefully read in relation not only to other poems that feature blind beggars but also in relation to prose commentaries on the presence of blind beggars in nineteenth-century city streets.  When Charles Lamb defended the rights of blind beggars in his 1822 essay “A Complaint of the Decay of Beggars in the Metropolis,” he argued against campaigns to remove blind beggars from the streets, asserting that the claims being made on private charity by visually disabled men were legitimate and that freedom of movement and social contact with a wider community were highly valued by, and beneficial to, people with visual disabilities.  In contrast, Andrew Halliday, writing in Volume 4 of London Labour and the London Poor (1851-1861), commended the London Mendicity Society, an organization whose aim was to bring an end to public begging, in part by encouraging police to arrest street beggars.  While Halliday views “blind men and cripples” as having a more legitimate claim than most beggars to public sympathy and charity, he is ill at ease with the presence of some beggars in public places.  He writes: “The officers of the Mendicity Society have cleared the streets of nearly all the impostors, and the few who remain are blind men and cripples […] I cannot think, however, that the police exercise a wise discretion in permitting some of the more hideous of these beggars to infest the street” (4:431-3). Focused on a personage who was arguably the public face of visual disability in the nineteenth century, the blind street beggar, Symons’ sonnet contributed not only to a well-established literary tradition of linking blindness with begging but also to an important and ongoing debate about begging, charitable giving and the presence of impoverished visually disabled people on Britain’s public streets.

He stands, a patient figure, where the crowd
Heaves to and fro; a sound is in his ears
As of a vexed sea roaring, and he hears
In darkness, as a dead man in his shroud.
Patient he stands, with age and sorrow bowed,
And holds a piteous hat of ancient years;
And in his face and gesture there appears
The desperate humbleness of poor men proud

What thoughts are his, as, with the inward sight,
He sees the glad unheeding Fair go by?
Is the long darkness darker for that light
And sorrow nearer when such mirth is nigh?
Patient, alone, he stands from morn to night,
Pleading in his reproachful misery.