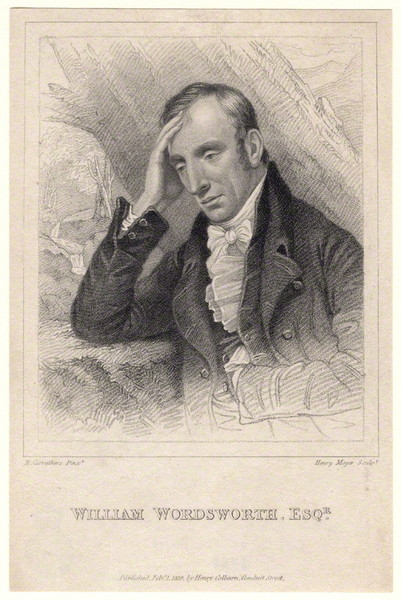 William Wordsworth’s (1770-1850) poetry contains several interesting and largely unexplored representations of disability.  One familiar pattern, seen in “Resolution and Independence” (1807) has the speaker of Wordsworth’s poem encountering a person with a disability and using the encounter as a spur to personal reflection. In Book VII of his autobiographical epic poem, The Prelude (1805, 1850), Wordsworth gives a detailed description of an encounter with a blind beggar.  The blind man, who stands “propp’d against a Wall,” is a visual spectacle for Wordsworth’s speaker, who describes himself as “smitten with the view.”  The portrait of the beggar that he provides emphasizes the blind man’s passivity and immobility; this man is “propp’d against a Wall,” his body “unmoving” and his face “fixed.”  What matters most to the sighted speaker about the blind man he observes and describes is the sign or “Label” that the blind man wears, a record of “the story of the Man, and who he was.” It is not, however, the content of this sign that is of interest to the speaker.  Instead, the sign is identified and valued as a symbol of a universal condition; Wordsworth finds in it a “type/ Or emblem” of the profound ignorance of human beings.  His speaker has gained new knowledge about, ironically enough, humanity’s lack of knowledge, but he does not come away with new knowledge about either the experience of disability or the particular experiences of an individual living with a disability.  This stands in contrast to Arthur Symon’s (1865-1945) later contribution to the genre of the poetic encounter with a blind street person, “The Blind Beggar” (1892), which leads him to reflect on the material conditions of the disabled poor.

…lost
Amid the moving pageant, ‘twas my chance
Abruptly to be smitten with the view
Of a blind Beggar, who, with upright face,
Stood propp’d against a Wall, upon his Chest
Wearing a written paper, to explain
The story of the Man, and who he was.
My mind did at this spectacle turn round
As with the might of waters, and it seem’d
To me that in this Label was a type
Or emblem, of the utmost that we know,
Both of ourselves and of the universe;
And, on the shape of the unmoving man,
His fixed face and sightless eyes, I look’d
As if admonish’d from another world. (1805, VII. 608-622)