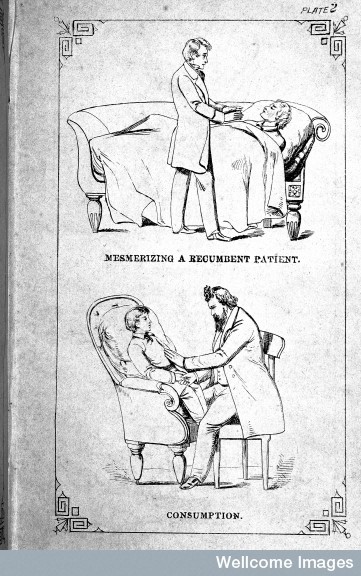 “Treatment of consumption and tuberculosis by mesmerism” from The Illustrated Practical Mesmerist by William Davey, c1854. Courtesy of Wellcome Images under a Creative Commons License (L0000487).

Mesmerism[1] was the term used by Victorians for the procedure during which the practitioner, or mesmerist, would fix his or her (usually his) gaze on a subject or make passes over their body in order to treat and even cure disabilities and illnesses such as consumption, tuberculosis, rheumatism, and gout. Although many traditional physicians considered mesmerism to be quack medicine practiced by charlatans on weak and gullible patients, some lay-practitioners, radical physicians, and patients saw power in the therapy. Author and social theorist, Harriet Martineau, who had written extensively on her own deafness and invalidism, was one such proponent of the curative properties of mesmerism. She claimed that a course in mesmerism had cured her of the uterine tumours that had disabled her to the point that she had become confined to a sickroom and had produced a significant improvement in her deafness.

In 1844, Martineau published a series of letters entitled “Letters on Mesmerism” in the Athenæum with the intention of educating her readers and fellow “sufferers” on the healing power of mesmerism. She hoped that her letters would confirm the scientific validity of mesmerism and that this would strengthen the movement of patients taking control over their own medical cases and assuming some of the power and authority of the medical profession. Ultimately, her candid description of her mesmerism and recovery prompted increased debate on the procedure and resulted in copious letters to her from disabled and ill persons asking for further information on her mesmerism and requests from traditional physicians seeking additional details of her recovery. However, Martineau’s publication also resulted in a barrage of disparaging responses to the Athenæum that questioned her ability to evaluate mesmerism’s effect on her health, that stated that she did not meet the intellectual conditions required to determine the efficacy of the therapy, and that implied that any beneficial results of procedures such as mesmerism reported by patients could only be called, as we would say today, a placebo effect. Martineau’s “Letters on Mesmerism” as well as the public responses to her publication are striking illustrations both of the debate between patients and physicians for authority over the disabled or ill body during the Victorian period and of Martineau’s role in this debate.

[1] This procedure was based on the work of eighteenth-century physician, Franz Anton Mesmer (1734–1815), who called his theory “animal magnetism ” and who believed that individuals who possessed natural healing powers could harness the strength of the mind and control a fluid permeating the entire universe to cure any illness considered incurable by traditional medicine.

“It is important to society to know whether Mesmerism is true. The revival of its pretensions from age to age makes the negative of this question appear so improbable, and the affirmative involves anticipations so vast, that no testimony of a conscientious witness can be unworthy of attention. I am now capable of affording testimony; and all personal considerations must give way before the social duty of imparting the facts of which I am in possession.”

“Those who know Mesmerism to be true from their own experience are now a large number; many more, I believe, than is at all supposed by those who have not attended to the subject. Another considerable class consists of those who believe upon testimony: who find it impossible not to yield credit to the long array of cases in many books, and to the attestation of friends whose judgment and veracity they are in the habit of respecting. After these there remain a good many who amuse themselves with observing some of the effects of Mesmerism, calling them strange and unaccountable, and then going away and thinking no more about them; and lastly, the great majority who know nothing of the matter, and are so little aware of its seriousness as to call it “a bore,” or to laugh at it as nonsense or a cheat.”

“A besetting sickness, almost disabling me from taking food for two years, brought me very low; and, together with other evils, it confined me to a condition of almost entire stillness, — to a life passed between my bed and my sofa [. . .] From that time, I lay still; and by means of this undisturbed quiet, and such an increase of opiates as kept down my most urgent discomforts, I passed the last two years with less suffering than the three preceding. There was, however, no favourable change in the disease. Everything was done for me that the best medical skill and science could suggest, and the most indefatigable humanity and family affection devise: but nothing could avail beyond mere alleviation. My dependence on opiates was desperate.”

“A few days after the arrival of my kind Mesmerist, I had my foot on the grass for the first time for four years and a half [. . .] I never before was in the open air, after an illness of merely a week or two, without feeling more or less overpowered; but now, under the open sky, after four years and a half spent between bed and a sofa, I felt no faintness, exhaustion, or nervousness of any kind”

“[f]rom the early summer of 1839, I was, till this autumn, a prisoner from illness. My recovery now, by means of mesmeric treatment alone, has given me the most thorough knowledge possible that Mesmerism is true”

“After my medical friend’s avowal[1] of his hopelessness, however, I felt myself not only at liberty, but in duty bound, to try, if possible, the only remaining resource for alleviation. I felt then, and I feel now, that through all mortification of old prejudices, and all springing up of new, nobody in the world would undertake to say I was wrong in seeking even recovery by any harmless means, when other hope was given up by all: and it was not recovery that was in my thoughts, but only solace. It never presented itself to me as possible that disease so long and deeply fixed could be removed; and I was perfectly sincere in saying, that the utmost I looked for was release from my miserable dependence on opiates. Deep as are my obligations to my faithful and skilful medical friend, for a long course of humane effort on his part, no one kindness of his has touched me so sensibly as the grace with which he met my desire to try a means of which he had no knowledge or opinion, and himself brought over the Mesmerist under whom the first trial of my susceptibility was made.”

“I put in a claim for my experiment being considered rational. It surely was so, not only on account of my previous knowledge of facts, and of my hopelessness from any other resource, but on grounds which other sufferers may share with me;— on the ground that though the science of medicine may be exhausted in any particular case, it does not follow that curative means are exhausted”

[1] Martineau is referring to Thomas Greenhow, her physician and brother-in-law. Greenhow, according to Martineau’s personal letters, had, in the course of treating her for uterine tumours he considered incurable by traditional methods, proposed that she attempt a course of mesmerism. She writes that he introduced her to the famous mesmerist, Spenser Hall (1812-1885). However, Greenhow refuted Martineau’s claims in his “Medical Report on the Case of Miss H—M—.”