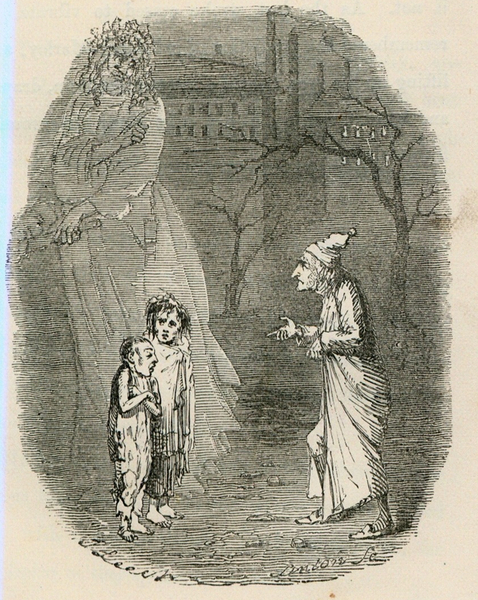 The illustration shows Want and Ignorance, a boy and a girl, standing in front of the Ghost of Christmas Present with Scrooge facing the triad in his nightcap. illustration by John Leech. 1843 Chapman and Hall edition of A Christmas Carol.

One of the most recognizable characters in Victorian fiction, “Tiny Tim” Cratchit reappears each Christmas in radioplays, television, stage, and film. Through these cultural reproductions, Tim has come to represent yuletide charity and the reductive idea that “the plight of the disabled can always be alleviated by philanthropy” (Fiedler 68)[1]. However, as the short selection of the story below shows, the text of A Christmas Carol itself gives a more complicated depiction of disability than this. On one hand, the melodramatic tone—“Alas for Tiny Tim, he bore a little crutch, and had his limbs supported by an iron frame!”— implies that Tim’s physical state inspires pity alone. Moreover, by way of synecdoche Tim’s identity is reduced to his non-normative body: his diminutive size and his crutch stand in for his name (Norden 190-91). In fact, Tim sees himself as a reminder of Christ’s healings, that is, of erasures of disability; that his father, Bob, reports this rather than Tim further obscures Tim’s autonomy. On the other hand, the passage also shows Tim as an active member of his community and family, taking full part in their religious and festive traditions. The narrator here not only depicts Tim’s body as bearing physical limitations, but also as using adapted and energetic mobility, as seen in his “active little crutch” (Rodas 67).

[1] Fiedler suggests that respect and empowerment do much more than charity and pity for people with disabilities.

“What has ever got your precious father then?” said Mrs. Cratchit. “And your brother, Tiny Tim! And Martha warn’t as late last Christmas Day by half-an-hour?”

“Here’s Martha, mother!” said a girl, appearing as she spoke.

“Why, bless your heart alive, my dear, how late you are!” said Mrs. Cratchit, kissing her a dozen times, and taking off her shawl and bonnet for her with officious zeal.

“We’d a deal of work to finish up last night,” replied the girl, “and had to clear away this morning, mother!”

“Well! Never mind so long as you are come,” said Mrs. Cratchit. “Sit ye down before the fire, my dear, and have a warm, Lord bless ye!”

“No, no! There’s father coming,” cried the two young Cratchits, who were everywhere at once. “Hide, Martha, hide!”

So Martha hid herself, and in came little Bob, the father, with at least three feet of comforter exclusive of the fringe, hanging down before him; and his threadbare clothes darned up and brushed, to look seasonable; and Tiny Tim upon his shoulder. Alas for Tiny Tim, he bore a little crutch, and had his limbs supported by an iron frame!

“Why, where’s our Martha?” cried Bob Cratchit, looking round.

“Not coming!” said Bob, with a sudden declension in his high spirits; for he had been Tim’s blood horse all the way from church, and had come home rampant. “Not coming upon Christmas Day!”

Martha didn’t like to see him disappointed, if it were only in joke; so she came out prematurely from behind the closet door, and ran into his arms, while the two young Cratchits hustled Tiny Tim, and bore him off into the wash-house, that he might hear the pudding singing in the copper.

“And how did little Tim behave?” asked Mrs. Cratchit, when she had rallied Bob on his credulity, and Bob had hugged his daughter to his heart’s content.

“As good as gold,” said Bob, “and better. Somehow he gets thoughtful, sitting by himself so much, and thinks the strangest things you ever heard. He told me, coming home, that he hoped the people saw him in the church, because he was a cripple, and it might be pleasant to them to remember upon Christmas Day, who made lame beggars walk, and blind men see.”

Bob’s voice was tremulous when he told them this, and trembled more when he said that Tiny Tim was growing strong and hearty.

His active little crutch was heard upon the floor, and back came Tiny Tim before another word was spoken, escorted by his brother and sister to his stool before the fire; and while Bob, turning up his cuffs—as if, poor fellow, they were capable of being made more shabby—compounded some hot mixture in a jug with gin and lemons, and stirred it round and round and put it on the hob[1] to simmer; Master Peter, and the two ubiquitous young Cratchits went to fetch the goose, with which they soon returned in high procession. (89-92)

[1] A metal shelf inside a hearth.