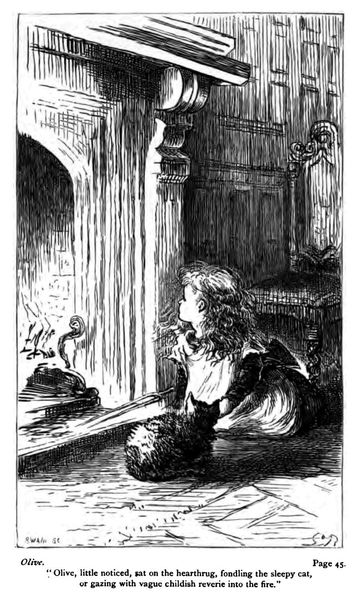 A black and white illustration shows a young Olive kneeling on the hearth and petting a cat.  Notably, her spinal deformity is not visible.  The caption reads:  "Olive, little noticed, sat on the hearthrug, fondling the sleepy cat, or gazing with vague childish reverie into the fire."  Illustration by G. Bowers, 1875.

Dinah Mulock Craik’s (1826-1887) novel Olive (1850), features a heroine who has a shoulder deformity but who goes on to establish a career as an artist and to win the love of a Scottish minister whom she rescues from religious doubt. Olive was one of many of Craik’s works to feature a protagonist with a disability—others include The Little Lame Prince (1875) and A Noble Life (1866).  In his review of A Noble Life, whose protagonist, the last Earl of Cairnforth was likely partly based on Craik’s friend Frank Smedley, Henry James remarked wryly, on that “lively predilection for cripples and invalids by which she has always been distinguished” (846).

This excerpt from the novel describes the first time that Olive’s father, Captain Rothesay, who has been absent in the West Indies for four years, sees his daughter.  Olive’s mother, Sybilla, has kept her daughter’s deformity a secret from her husband, fearing he will be displeased.  Craik refrains from describing her heroine’s “defect” in medical terms.  Instead, she borrows the language of fairy tales to describe the young girl’s physical appearance, placing her heroine within an established and perhaps more sympathetic literary tradition of viewing physical difference.  Other literary characters in the mid-nineteenth-century novel described using fairy tale language include Philip Wakem in George Eliot’s The Mill on the Floss (1860) and Madame Walravens in Charlotte Bronte’s Villette (1853).

By her stature she might have been two years old, but her face was like that of a child of ten or twelve—so thoughtful, so grave. Her limbs were small and wasted, but exquisitely delicate. The same might be said of her features; which, though thin, and wearing a look of premature age, together with that quiet, earnest melancholy cast peculiar to deformity, were yet regular, almost pretty. Her head was well shaped, and from it feel a quantity of amber-coloured hair—pale ‘lint-white locks’, which, with the almost colourless transparency of her complexion, gave a spectral air to her whole appearance. She looked less like a child than a woman dwarfed into childhood the sort of being renowned in elfin legends, as springing up on a lonely moor, or appearing by a cradle-side; supernatural, yet fraught with a nameless beauty. She was dressed with the utmost care, in white, with blue ribands; and her lovely hair was arranged so as to hide, as much as possible the defect, which, alas! was even then only too perceptible. It was not a humpback, nor yet a twisted spine; it was an elevation of the shoulders, shortening the neck, and giving the appearance of a perpetual stoop. There was nothing disgusting or painful in it, but still it was an imperfection, causing an instinctive compassion—an involuntary ‘Poor little creature, what a pity!’