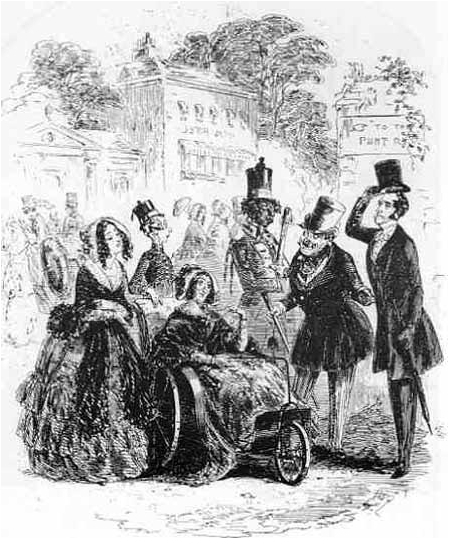 Mrs. Skewton, seated in a three wheeled chair in a crowded street, is greeted by a gentleman who tips his hat to her.  Phiz (Hablot Knight Browne), “Major Bagstock is delighted to have that opportunity”, from Charles Dickens, Dombey and Son. London: Bradbury & Evans, 1847.  Scan by Philip V. Allingham. Victorian Web. <http://www.victorianweb.org/art/illustration/phiz/104.html>.

Charles Dickens’s Dombey and Son (1846–1848) attests to his career-long interest in chair-bound characters[1]—characters who, because of illness, injury, or egotism, are confined or confine themselves to a “wheeled chair” (alternately referred to as the “Bath wheeled chair” or the “Bath chair”). In this particular novel, Dickens provides two examples of Victorian chair users: Paul Dombey, who, when ill, travels by wheeled chair so that he can sit by the sea with his sister; and Mrs. Skewton, an elderly lady who travels in a wheeled chair to perpetuate an illusion of wealth and social status. The former he renders sympathetic, while the latter he depicts as a figure of falseness—a heap of makeup and clothes that almost melts into the chair with which she joins her body.

This excerpt from Dombey and Son, in which Mrs. Skewton is first introduced to the reader, illustrates Dickens’s perhaps harsh treatment of Mrs. Skewton and invites readers to consider the reasoning behind certain prejudices against chair users. In his depiction of the relationship between Mrs. Skewton and her page, Withers, Dickens engages with past and contemporary criticism directed toward people who travel by chair. In the novel, Withers is reduced to a beast of burden, “butting at the carriage with his head” like an elephant (317). To further his point, Dickens later describes Withers as another animal: “toiling after the chair, uphill, like a slow battering-ram” (321). Dickens’s furious humor levels an attack on Mrs. Skewton for her treatment of Withers as though he were an animal, an object for her personal use.

To better understand Dickens’s portrayal of Mrs. Skewton, a brief history of the wheeled chair’s evolution from the sedan chair is necessary. First used in London by the Duke of Buckingham in the early seventeenth century, the sedan chair was less a “chair,” per se, and more of an enclosed box with glass doors and a detachable roof that was carried through the streets of London by two or more porters (alternately called “chairmen”), with “link-boys,” or torch bearers, employed to light the way for nighttime journeys. Patronized primarily by the wealthier classes of society, the sedan chair received much negative attention from the public, in part because the sedan chairs often collided with and injured pedestrians and in part because the public viewed the technology as demeaning to the chairmen. As evidenced by nineteenth-century periodicals, the negative discourse surrounding the sedan chair continued well past its era of usage. For instance, one anonymous writer for Chambers’s Journal of Popular Literature, Science and Arts suggests that seventeenth-century Londoners “grumbl[ed] indignantly at the pride of the man [the Duke] who employed his fellow-creatures to do the service of beasts of burden” (91–92).[2] While the chairs were most often used by those for whom walking was a burden, their support by lower-class muscle caused the public to reject them wholesale as an unnecessary luxury.

In the nineteenth century, the sedan chair became increasingly obsolete as it was replaced by the wheeled chair, which was initially introduced in Bath, Leamington, and other seaside health spas as a means to transport the ill to the mineral water baths. Contrary to their wheel-less predecessors, which were owned or hired by the “able-bodied” and “disabled” alike, Bath chairs were used almost entirely by those who could not walk easily. The demographic of chair users shifted in another way: whereas the sedan chairs were primarily employed by elite society, wheeled chairs, because cheaper to hire, were more accessible to middle class patrons. Despite these changes, the wheeled chair still attracted hostilities, particularly owing to its effect on the chairmen, who often developed orthopedic impediments of their own while working. For example, in “The Bath-Chair Man’s Story,” Florence Marryat’s chairman-protagonist references his “old round back,” which results from his constant stooping (516).[3] Prejudices against wheeled-chair users as lazy—choosing to ride rather than walk—and as demeaning and debilitating the lower-class chairmen continued to solidify during the nineteenth century.

In characterizing Withers alternately as a battering ram and as an elephant, then, Dickens underscores the class dynamics inherited by the wheeled chair from its seventeenth- and eighteenth-century precursor. Dickens alludes to such class tensions when he portrays Mrs. Skewton as “calling to the page with all the languid dignity with which she had called in days of yore to a coachman with a wig, cauliflower nosegay, and silk stockings” (320). Her use of the wheeled chair thus exposes her to the narrator’s and the reader’s critical gaze, especially because she travels in it not out of necessity, but rather as a display of the wealth and status that she, in actuality, lacks. As the narrator indicates, after becoming accustomed in her youth to travel by barouche, Mrs. Skewton “[maintains] the wheeled chair and the butting page: there being nothing whatever, except the attitude, to prevent her from walking” (319). Attending to the various elements that contributed to the assemblage of the Victorian wheeled chair—the page, the chair user, and the chair itself—Dickens highlights the objectification of an often forgotten participant, the chairman, thereby positioning prejudices against chair users as, at least partially, class-based. Mrs. Skewton’s pretense of need and her mistreatment of Withers contribute to her removal from readerly sympathy until she becomes terminally ill and truly dependent upon the aid and support of others.

[1] This preoccupation of Dickens’s was first noted by M. J. Lesser in “Dickens and the Chair-Bound.” See below for full reference.

In this manner the Major and Mr Dombey were walking arm-in-arm, much to their own satisfaction,[1] when they beheld advancing towards them, a wheeled chair, in which a lady was seated, indolently steering her carriage by a kind of rudder in front, while it was propelled by some unseen power in the rear. [ . . . ]

‘Why, what the devil have we here, Sir!’ cried the Major, stopping as this little cavalcade drew near.

‘My dearest Edith!’[2] drawled the lady in the chair, ‘Major Bagstock!’

The Major no sooner heard the voice, than he relinquished Mr Dombey’s arm, darted forward, took the hand of the lady in the chair and pressed it to his lips. With no less gallantry, the Major folded both his gloves upon his heart, and bowed low to the other lady. And now, the chair having stopped, the motive power became visible in the shape of a flushed page pushing behind, who seemed to have in part out-grown and in part out-pushed his strength, for when he stood upright he was tall, and wan, and thin, and his plight appeared the more forlorn from his having injured the shape of his hat, by butting at the carriage with his head to urge it forward, as is sometimes done by elephants in Oriental countries.

[1] Mr. Dombey and Major Bagstock have just arrived in Leamington, a British resort town famous for its medicinal springs.