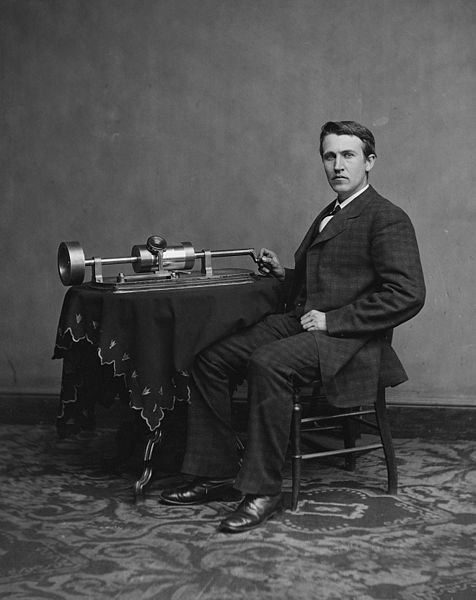 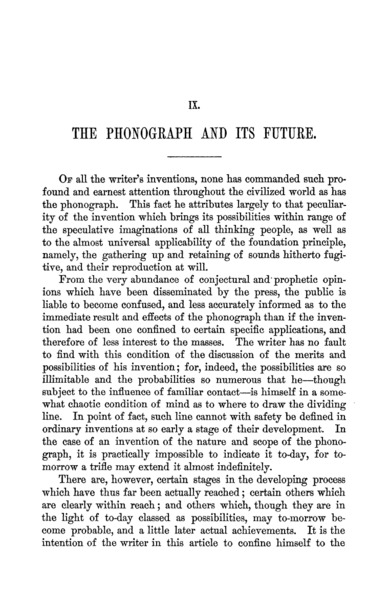 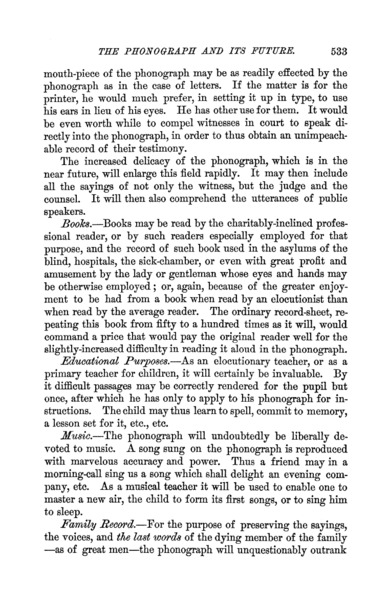 Thomas Edison’s phonograph was the first machine to reproduce the human voice. In December 1877, Edison’s associates assembled a device on which Edison recorded the words of the nursery rhyme “Mary Had a Little Lamb.” The prototype consisted of a sheet of tinfoil wrapped around a grooved cylinder and rotated with a hand crank. Speech created indentations in the tinfoil (and, later, wax cylinders) that could be played back afterward. Phonograph demonstrations entertained audiences throughout the country by playing recitations, songs, music, and random noises such as whistling or whooping.

Edison proposed using the phonograph to read aloud to people with disabilities in a promotional essay written for the North American Review. The essay identifies numerous uses for the phonograph including playing music, dictating letters, teaching elocution, animating dolls, recording courtroom testimony, preserving the last words of dying relatives, conserving the speeches of famous orators, and enabling clocks to announce the hours of the day. It also proposes using the phonograph as a reading machine: “Books may be read by the charitably-inclined professional reader, or by such readers especially employed for that purpose, and the record of such book used in the asylums of the blind, hospitals, the sick-chamber, or even with great profit and amusement by the lady or gentleman whose eyes and hands may be otherwise employed; or, again, because of the greater enjoyment to be had from a book when read by an elocutionist than when read by the average reader” (533). Edison envisioned books being read aloud to people with disabilities who were unable to read for themselves as well as people without disabilities who preferred listening to books recited by a professional narrator. He later described such recordings as “phonographic books, which would speak to blind people without effort on their part” (646).

Edison’s prediction of a talking book was ahead of its time in the 1870s and 1880s. His idea was to record books of approximately 40,000 words on a single plate measuring ten inches square. Edison later proposed recording Charles Dickens’s Nicholas Nickleby on four wax cylinders. Yet tinfoil and wax cylinders could only play a few minutes of speech at a time. Recording an entire Dickens novel required hundreds of wax cylinders. It would be impossible to record an entire novel until advances in the field of sound recording made by the film and radio industries in the twentieth century.

The American Foundation for the Blind and Library of Congress recorded the first books for people with vision impairments in 1934. These recordings, known as “talking books,” consisted of a book read aloud onto a set of long-playing phonograph records. The Library of Congress hailed the talking book program as the realization of Edison’s ambition to read aloud to people who were blind.

Books .—Books may be read by the charitably-inclined professional reader, or by such readers especially employed for that purpose, and the record of such book used in the asylums of the blind, hospitals, the sick-chamber, or even with great profit and amusement by the lady or gentleman whose eyes and hands may be otherwise employed; or, again, because of the greater enjoyment to be had from a book when read by an elocutionist than when read by the average reader. The ordinary record-sheet, repeating this book from fifty to a hundred times as it will, would command a price that would pay the original reader well for the slightly-increased difficulty in reading it aloud in the phonograph. (533)

Phonographic Books.—A book of 40,000 words upon a single metal plate ten inches square thus becomes a strong probability. The advantages of such books over those printed are too readily seen to need mention. Such books would be listened to where now none are read. They would preserve more than the mental emanations of the brain of the author; and, as a bequest to future generations, they would be unequaled. For the preservation of languages they would be invaluable. (534)

Every one of these uses the perfected phonograph is now ready to carry out. I may add that, through the facility with which it stores up and reproduces music of all sorts, or whistling and recitations, it can be employed to furnish constant amusement to invalids, or to social assemblies, at receptions, dinners, etc. Any one sitting in his room alone may order an assorted supply of wax cylinders inscribed with songs, poems, piano or violin music, short stories, anecdotes, or dialect pieces, and, by putting them on his phonograph, he can listen to them as originally sung or recited by authors, vocalists and actors, or elocutionists. The variety of entertainment he thus commands, at trifling expense and without moving from his chair, is practically unlimited. Music by a band, in fact whole operas, can be stored up on the cylinders, and the voice of Patti singing in England can thus be heard again on this side of the ocean, or preserved for future generations. On four cylinders eight inches long, with a diameter of five, I can put the whole of “Nicholas Nickleby” in phonogram form. (646)