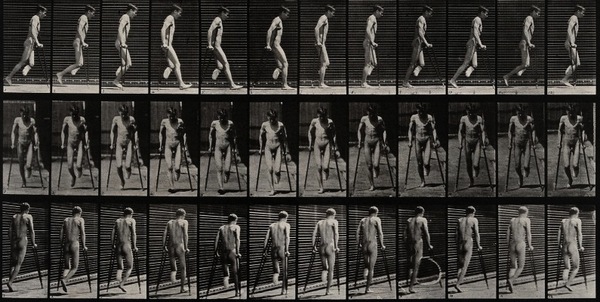 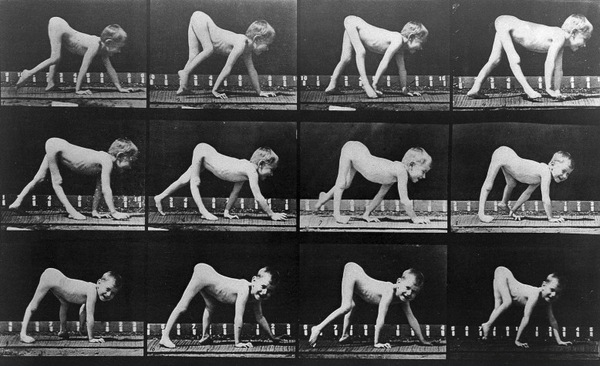 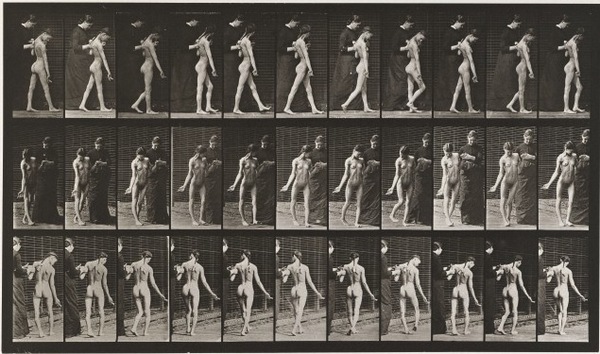 In 1887, Eadweard Muybridge (1830-1904), the American photographer, published Animal Locomotion: An Electro-Photographic Investigation of Consecutive Phases of Animal Movement, an eleven-volume collection of photographs of instantaneous or consecutive movement. It features photographs of ‘abnormal movement,’ including: An amputee on crutches, plate 537; A double amputee climbing on to a chair, descending from a chair and moving, plate 538; Deformed child walking on arms and legs, plate 539; A girl with multiple cerebral-spinal sclerosis walking with a nurse, plate 541. Figures were photographed without clothes, allowing for the unobstructed scrutiny of their bodies, and in front of grids, which invited viewers to treat the pictures as scientific studies.

In Animal Locomotion, Muybridge arranged his photographs according to a hierarchy, with male and female nudes presented in the first volumes, followed by draped males and females, then children. Volume 8, which was devoted to the abnormal movements of males, females and children, appeared ahead of photographs of animals, domestic and wild. By arranging the photographs in this way, Muybridge positioned those with disabilities lower than those with ‘healthy’ bodies and just above animals. He also included photographs of athletes, which juxtaposed his photographs of the disabled, in turn reflecting late nineteenth-century conceptions of health and beauty, which proved especially relevant for artists and scientists of the day. Muybridge is considered to be an important figure in the history of photography and cinema.