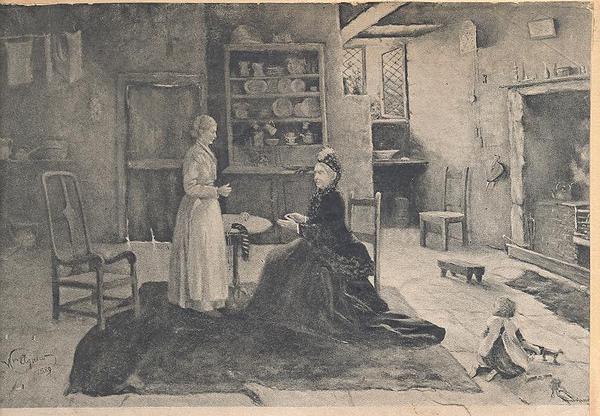 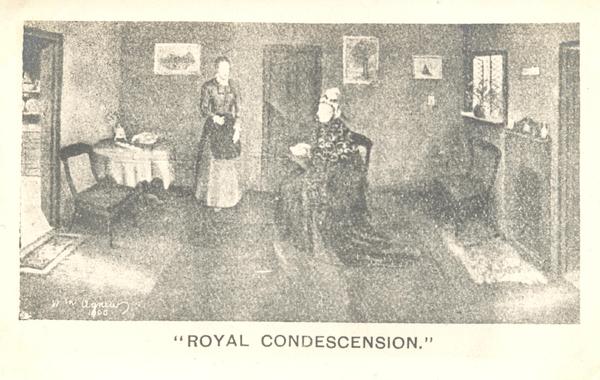 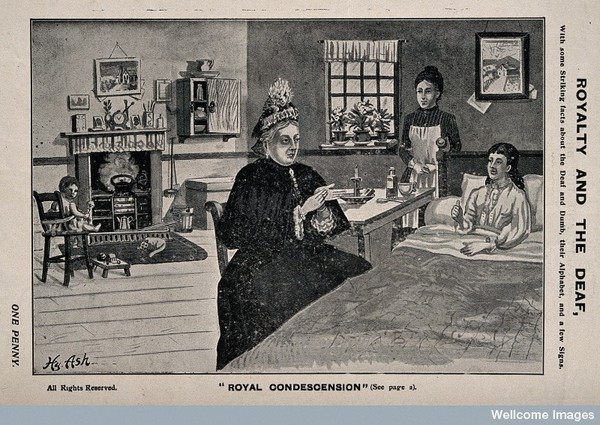 In 1890, a 36” x 24” painting depicting Queen Victoria communicating with a deaf woman in front of a cozy hearth, was exhibited at the Edinburgh Exhibition. Titled “Royal Condescension,” this was the second of a series painted by the amateur painter William Agnew (1846-1941); each shows the Queen in various stages of conversation with a woman, but with minor differences: the 1883 version has a dog on the hearth and was shown at the Chicago World’s Fair; the 1889 version has a baby and won an award at the Edinburgh Exhibition; and the 1900 focuses only on the Queen and the woman. Agnew painted only two other works, “True Nobility” (1897) and “Post Office, Whippingham, I.O.W.” There is little evidence that any of these paintings survive.

Born deaf and mute, Agnew received his education at an institution for the deaf in Glasgow, where he learned sign-language and fingerspelling. After leaving school, he was employed in various occupations, including as a bookbinder, printer, and writer. As a writer, he penned several articles advocating sign language in deaf schools, and condemning the implementation of oralism (educating the deaf through articulation and speech) in British schools. It was during this period that fierce debates were ranging amongst educators over the best pedagogical means for instructing deaf-mutes and on the value of sign-language for “normalizing” the deaf. In 1880, educators gathered at the International Congress on Education of the Deaf voted to ban sign language in the classroom and replace it with oral education. Although little is known about Agnew, he certainly saw oralism as a threat to his own identity and culture. He was recruited to fundraise for the building of a new Institute for Deaf and Dumb Adults in Glasgow and West Scotland that would rely on instruction through sign language. Upon exhibiting his 1889 “Royal Condescension” painting to Queen Victoria, Agnew received a generous contribution from the Queen (£50). Funds from an 1891 grand bazaar raised enough to purchase a site for the new building and Agnew was made Director of the Institution.
Agnew’s “Royal Condescension” paintings are a testament to his campaigns on the importance of sign language.  Queen Victoria was familiar with fingerspelling, having learned as her daughter-in-law Princess Alexandra’s hearing worsened over the years until she became deaf. According to Jennifer Esmail, Agnew’s paintings “not only depicts a unique conversation between a monarch known for her fingerspelling fluency, and one of her poor and ill subjects but also allows us a rare glimpse into the visual language of deaf Victorians” (1). The Queen spook the language of the deaf, refusing, as some accounts noted, to bring a translator. This was tremendously supportive to the manualist campaigns against oral education, for if the monarch spoke the language, why should it be an issue in the classroom?

Even the woman in the painting, Mrs. Elizabeth Tuffield (neé Bective Groves, 1840-1874), gives us some insight into the lives of the Victorian deaf. The daughter of a schoolmaster on the Isle of Wright, Tuffield attended the London Asylum for the Deaf and Dumb on Old Kent Road (est.1792), one of the first schools in England for the deaf. She eventually married a bootmaker, Samuel (b.1840) in 1870, but she left him; sources indicate Samuel was abusive.

The historical significance of Agnew’s “Royal Condescension” paintings is also revealed in how they were reproduced and distributed. Tracts and pamphlets were popular tools in the nineteenth century to propagate powerful visual images, especially to draw attention to a cause. They raised awareness for political or social issues, asked for contributions to fundraising campaigns, and/or merely disseminated information. As many educational asylums for the deaf in the nineteenth-century relied on donations and subscriptions, small pamphlets were often printed for fundraising, even consisting illustrations of sign language—as both information and novelty. Harry Ash (1863-1934) was a deaf draughtsman and designer of wallpaper who, like Tuffield, received his education from the London Asylum. In the late 1890s, he published some pamphlets on sign language, some of which were advertised in the publications of the British Deaf and Dumb Association and the British Deaf Times. In one pamphlet Ash copied Agnew’s “Royal Condescension” painting on the cover, and included the fingerspelling alphabet in the contents. Ash’s pamphlets were partly a response to his experiences at the London Asylum, where in the middle of his education, the system of instruction changed from sign language to the oral method, hindering his progress in learning English. Sign language was necessary and something that every Briton should learn.