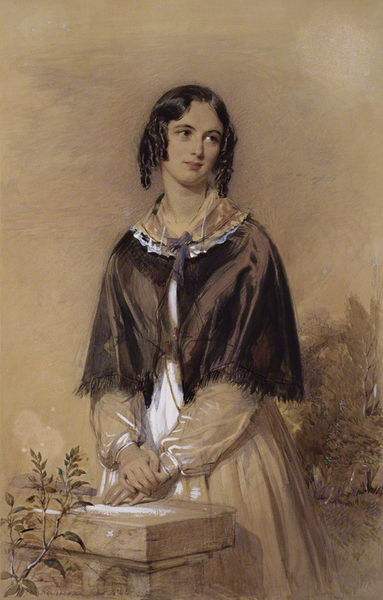 Yonge’s 1853 novel The Heir of Redclyffe was the bestseller which made her name, but it was The Daisy Chain (1856) which cemented her reputation. In the preface, Yonge describes it as “a Family Chronicle” (v), and this was the genre with which she came to be most closely associated. The novel tells the story of the eleven May children,[1] who lose their mother in the opening chapter.

Yonge was to become famous for her portrayals of invalids, and disabled characters abound in all her major novels: Charles Edmonstone in The Heir of Redclyffe, Ermine Williams in The Clever Woman of the Family (1865) and Geraldine Underwood in The Pillars of the House (1873). Margaret May is perhaps Yonge’s most archetypal representation of an invalid; injured in the carriage accident which kills her mother, she never walks again, spending seven years as an invalid before succumbing to a wasting illness.

Margaret’s patience and resignation, developed during her years confined to her couch, are a powerful influence on her impulsive younger sister, Ethel, whose maturation forms the novel’s main narrative arc. It is Margaret who persuades Ethel to give up her attempt to keep pace with her brother Norman’s classical studies in order to focus on her daughterly duties, and whose decline and death make way for Ethel to take her place as the mother-substitute in the family. Margaret herself is said to be “perfectly content and happy”, knowing “the temptation of her character had been to be the ruler and manager of everything, and she saw it had been well for her to have been thus assigned the part of Mary, rather than of Martha” (633). She repeatedly suggests that she would have enjoyed managing a household and a social life, to the point of being domineering and worldly, like her sister Flora, had not the enforced passivity of invalidism enabled her to achieve a submissive, and truly Christian, attitude.

Yonge’s depiction of Margaret’s invalidism had great cultural resonance: in 1866, a critic for the Saturday Review wrote that “An angelic being with a weak spine, who, from her sofa, directed with mild wisdom the affairs of the family or the parish, was a favourite creation of our lady-novelists of the pre-Braddonian period.” (438-9)[2] The author mentions Yonge as one of a group of novelists, including Elizabeth Sewell and Dinah Mulock Craik, who were famous for their interest in invalidism. Although this subject was seen as distasteful by some twentieth century critics – Georgina Battiscombe describes Margaret as “a sad bore” (94) and Q. D. Leavis was revolted by Yonge’s “morbid” preoccupation with “permanent invalid[s]” (153) – more recently, critics have begun to point out the powerful aspects of Margaret’s representation as an invalid. Before bequeathing her place to Ethel, she achieves a central place in the domestic sphere which is Yonge’s focus and ideal, and thus succeeds in transforming her enforced immobility into a source of indirect power.

The following extract is taken from her death-bed scene.

The Doctors were right, and the Consecration morning was the last of full consciousness. From the hour when she had heard the sound of Alan’s bells,[1] her ears were closed to earthly sounds. There was very little power of intercourse with her, as she lingered on the borders of the land very far away, where skill and tenderness could not reach either body or spirit. Often the watchers could not tell whether she was conscious, or only incapacitated from expression, by the fearful weight on her breath which caused a restlessness most pitiable in the exhausted helpless frame, wasted till the softest touch was anguish. Now and then came precious gleams when a familiar voice or some momentary alleviation would gain a smile, or thanks, and they thought her less restless when Richard read prayers beside her, but words were very rare, only now and then a name, and when in most distress, ‘it will soon be over,’ ‘it will soon be over,’ occurred so often, that they began to think it once her solace, and now repeated habitually without meaning.

They could not follow her into the valley of the shadow of death, but could only watch the frail earthly prison house being broken down, as if the doom of sin must be borne, though faith could trust that it was but her full share of the Cross. [...]

It was midnight, on the longest night of the year; Ethel was lying on her bed and had fallen into a brief slumber, when her father’s low, clear voice summoned her: ‘Ethel, she is going!’

There was a change on the face, and the breath came in labouring gasps. Richard lifted her head, and her eyes once more opened; she smiled once more.

He threw himself on his knees beside her, but she looked beyond him, ‘Mamma! Alan! oh! there they are! More! more!’ and, as though the unspeakable dawned on her, she gasped for utterance, then looked, with a consoling smile, on her father. ‘Over now!’ she said – and the last struggle was ended. That which Richard laid down was no longer Margaret May.

Over now! The twenty-five years’ life, the seven years’ captivity on her couch, the anxious headship of the motherless household, the hopeless betrothal, the long suspense, the efforts for resignation, the widowed affections, the slow decay, the tardy, painful death agony – all was over. Nothing left, save what they had rendered her undying spirit, and the impress her example had left on those around her.

The long continuance of the last suffering had softened the actual parting; and it was with thankfulness for the cessation of her pain that they turned away, and bade each other good-night.

Ethel would not have believed that her first wakening to the knowledge that Margaret was gone, could have been more fraught with relief than with misery. And, for her father, it seemed as if it were a home-like, comfortable thought to him, that her mother had one of her children with her. He called her the first link of his Daisy Chain drawn up out of sight; and, during the quiet days that ensued, he seemed as it were to be lifted above grief, dwelling upon hope. [...]

Jennings [was] added to the bearers, their own men, and two Cocksmoor labourers, who, early on Christmas Eve, carried her to the Minster. Last time she had been there, Alan Ernescliffe had supported her. Now, what was mortal of him lay beneath the palm tree, beneath the glowing summer sky, while the first snow flakes hung like pearls on her pall. But, as they laid her by her mother’s side, who could doubt that they were together?”

[1] The bells were paid for by Margaret's fiance, Alan Ernescliffe, a sailor who died overseas before they could be married, and endowed the new church at Cocksmoor in his will. The lovers are shown to be united in death through the church, as they never could be in life.